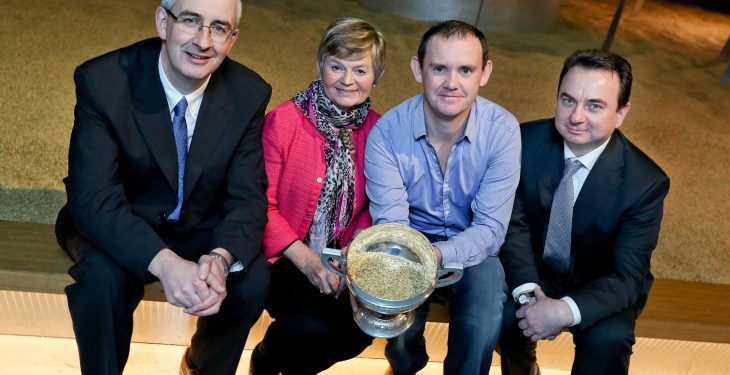 Colin O’Brien Beer and Packaging Director of Diageo and on right Peter Nallen  COO of Boortmalt Group who presented Joyce and Robert Chambers, from Castlemitchell, County Kildare with the Guinness Perpetual Cup

The Kildare-based farmers were awarded the Guinness Perpetual Cup by the Minister for State, Andrew Doyle.

The mother and son team scooped the top prize in the Malting Barley Excellence Awards at the event organised by Boortmalt and hosted by Diageo in the Guinness Storehouse.

The awards acknowledge excellence in malting barley production and promote sustainability in the supply chain.

There are over 600 barley growers in Ireland and the Malting Barley Excellence awards bring together the best growers from the five barley supply regions, while also recognising the best seed producers.

Robert Chambers, who is a third-generation barley grower said he was delighted to be taking home the award back to Co. Kildare.

“We have been growing barley on our farm for three generations and we work hard to grow barley that is of a excellent quality to be part of this great brewing tradition.

“Growing premium barley requires attention to detail and we have found that by consistently ensuring the same seeding rates and fertiliser rates as per the Boortmalt and Teagasc programme we have seen great results,” he said.

Minister Andrew Doyle added that Ireland’s agricultural industry is at the heart of some Ireland’s most well-known and respected exports and this is especially true when it comes to malting barley and Guinness.

“Guinness, and many other great companies involved in the food and drink sector have an excellent reputation overseas.

“This is based on their own very high production standards and great marketing, and it also depends on accessing the best quality ingredients which people like the farmers we are with today, grow and supply with incredible skill and dedication,” he said.

Diageo Ireland is one of Ireland’s largest exporters, and the most important exporter in the high value-added food and beverage category.

The high-quality, world-renowned Diageo products are exported to 150 countries globally, with annual exports of more than €800m.

Colin O’Brien, Beer and Packaging Director at Diageo said Diageo is proud of the contribution it make to the rural economy in Ireland.

The malted barley that we buy from Boortmalt amounts to more than twice the value of Ireland’s total barley exports and over 300 tonnes of it are used daily to make Guinness.

“Guinness is a world renowned product and we demand high specifications for our grains – that’s why we purchase from Boortmalt because we can confident that all our grain is responsibly grown and sourced within a sustainable supply chain,” he said.