Ireland is the most important issue to resolve in the Brexit debate, according to Ian Wright, CBE.

The Director General of the Food and Drink Federation in the UK, the voice of the UK’s food industry, spoke at a Bord Bia seminar in London today, where he addressed over 100 representatives from the Irish food and drink industry.

The seminar looked at the implications arising from the UK’s exit from the European Union, where Irish delegates heard from a series of UK experts on current economic and trading market conditions and the UK’s retail environment.

“Brexit is the most serious and significant peacetime challenge to face food and drink manufacturers in modern times,” he said.

It will reshape the industry in every way and in my opinion, Ireland is the most important issue to resolve in the Brexit debate.

“The level of integration between the UK and Ireland means the Brexit will have profound implications for Irish manufactures too.

“It is the Food and Drink Federation’s contention that those challenges can be best faced together,” he said.

James Walton, Chief Economist with IGD – the global retail insight, research and training body – provided an insight into the implications of Brexit.

In addition, Paul Hollingsworth, an Economist with Capital Economics delivered a macroeconomic outlook.

Hollingsworth said while the UK economy appears to have remained resilient in the immediate aftermath of the Brexit vote, there are a number of headwinds on the horizon.

In particular, there remains a lot of uncertainty surrounding the process of leaving the EU and the UK’s future trading relationships.

“Moreover, the post-referendum fall in the value of Sterling is set to drive up consumer price inflation from about 1% at present to over 3% in early 2018,” he said. 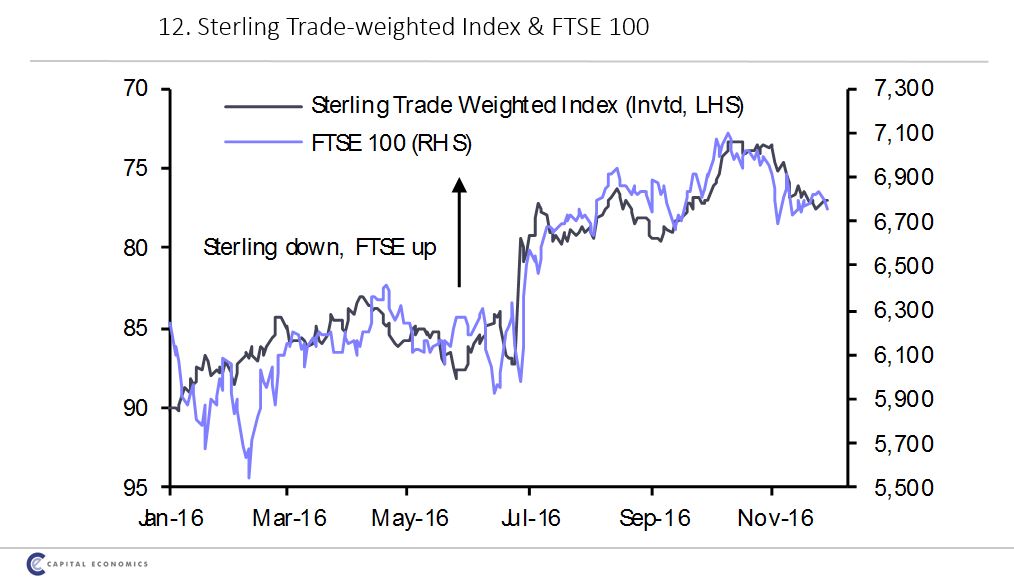 Fluctuations in Sterling since the beginning of 2016. Source: Capital Economics

Following today’s seminar, Bord Bia and the Minister for Agriculture, Michael Creed will host a trade reception for over 400 representatives from the British and Irish food and drink industry.

The annual reception, held at the Embassy of Ireland in London, provides an opportunity for Irish food and drink companies to build and fortify relationships with UK buyers and senior representatives from leading British retail, foodservice and manufacturing outlets.

According to Bord Bia, Ireland and Britain trade over €1 billion worth of goods and services every week.

The UK is a major net importer of food, with imports accounting for about one-third of consumption, it says.

According to the Institute of Grocery Distribution (IGD), as of August 17, 2016, the total UK grocery market is valued at £179.1 billion and ranked as the 9th largest global grocery market and 4th largest European market.