Levels of optimism among business owners in the food and agri-business sector have fallen when compared to how businesses were feeling this time last year.

The dip in optimism is most acute outside of Dublin, with companies in the Connaught/Ulster region experiencing the sharpest decline.

This is according to the Food and AgriBusiness 2019 report which was launched by IFAC earlier this week in Dunlin’s city centre. 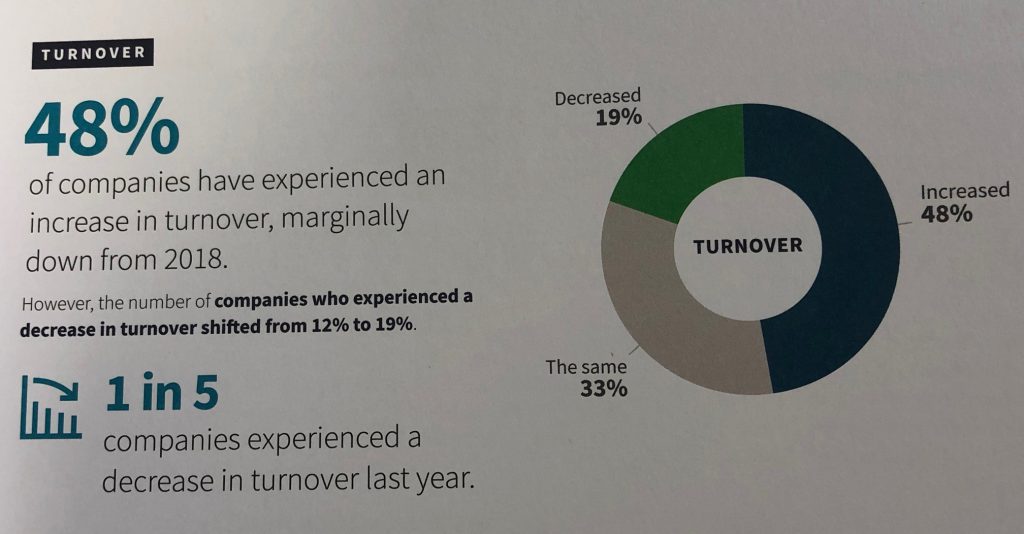 Its author, David Leydon, head of food and agri-business, also pointed out that when compared with 2018, fewer companies achieved an increase in turnover, while more experienced increased costs and declining margins.

On a more positive note, 83% of businesses which looked for bank funding were successful – up from 78% in 2018.

He continued: “Encouragingly, the majority of businesses which participated in this year’s research are starting to action and mitigate their impact on climate change – with waste and by-product management the most common action (51%).”

Optics for the future

Meanwhile, since the 2018 report, there is a decrease in the number of companies “optimistic” about the next 12 months.

While 59% of companies remain optimistic, agri-businesses and those based outside of Dublin are driving this decline in optimism.

Leydon continued: “48% of companies have experienced an increase in turnover; marginally down from 2018.

“However, the number of companies that experienced a decrease in turnover shifted from 12% to 19%.”

The report also indicates that one in five companies experienced a decrease in turnover last year and while 62% of companies report that “costs are still increasing”, there appears to be an average cost increase of up to 5% affecting 51% of companies.

33% of businesses experienced an increase in costs of between 5% and 10%.

He continued: “Key drivers of rising costs for companies include a competitive marketplace for staff leading to increased employment costs as we approach full employment and an increase in raw materials and other input costs.

“Companies were also more likely to report that margins have decreased; the average margin decrease was 7% in 2018 and 6% in 2019.

“For those companies that increased margin over the past 12 months the average percentage increase was 6%.”