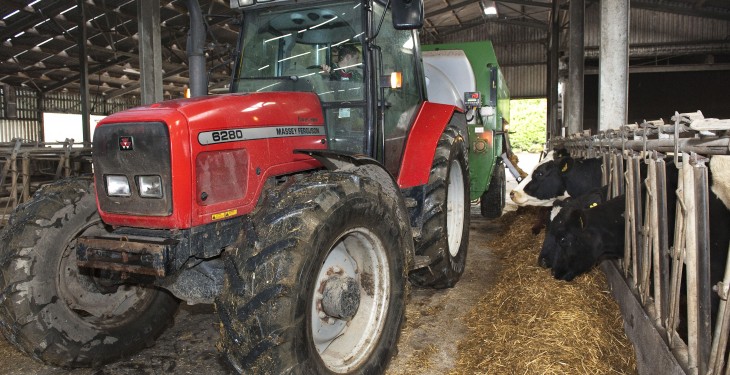 Richard Keenan & Co. Ltd recently launched their inTouch system for Northern Ireland at a function in Hillsborough. It says InTouch is the new easy way for livestock farmers to get more from their feeds through precision nutrition and precision feeding.

This new technology enabled service, links farms around the world to the Keenan inTouch centre in Kilkenny

Keenan’s claims it delivers peace of mind along with improved sustainability and profitability to milk and beef producers. The farmer’s own nutritionist or Keenan inTouch specialists can remotely monitor feeding information and change animal diets as and when required.

He said that the current lifetime yield of cows in Northern Ireland was 27,000 litres and that the ratio between replacements heifers and cows had gone from 1:7.5 in 1984 to 1:4 in 2011 so all this was a challenge for the industry

Conan Condon, inTouch Director with Keenan stated that Cloud Based feeding technology connects the inTouch centre directly to the farm. “We have made it accessible from anywhere with a web connection.

Last year inTouch was run in UK on a pilot basis with almost 600 farms, all Keenan customers. One group had machine and nutrition support while another group were using inTouch. The inTouch farm group produced 2 litres milk per cow per day more and made 57p/cow/day more margin than the other Keenan group.

This allows the farmer or their advisors to access what’s actually happening on the farm. Whenever the machine is switched on, the data is sent to the Cloud. It also allows for the user to send new rations to the machine.”

According to Conan “precision feeding is critical for the importance of the physical mix and this system ensures that we get the correct physical mix on a repeatable basis. Having this real-time data has enabled us to transform how we do things and be even more effective.

Now every day the Keenan nutritionists in Kilkenny receive thousands of records from around the world. The technology does the number crunching and identifies farms falling outside the system parameters.

The team then analyse this data using their on-farm experience and knowledge of the Keenan system and make contact with the customer. So customers get the advantage of immediate information coupled with the benefits of an experienced team.”

Gerard Keenan, Executive Chairman, spoke on “Innovative & Resilient Food Supply Chains.” He said farmers like Andrew Adair of Antrim, Alex Steen of Tyrone and Brian Rohan of Laois, talk about how easy inTouch is to use and are achieving significant animal health, fertility and feed cost benefits**.

According to Gerard “China has just reported how 20% of its arable lands and 10% of its grasslands are heavily polluted with consequences for food supply and safety. Five years ago the Chino valley in California had 400 dairy farms who produced as much milk as Denmark.

Today, there are only 80 farms and cow numbers have dropped by 80%.” He pointed out that a RABO Bank report in 2011 advocated supply chain collaboration as a core risk reduction strategy.

Collaboration in the supply chain is happening to reduce waste, add value, save effort and cost. “We need to improve profitability and reduce risk for all the participants. inTouch is facilitating supply chain collaboration” says Gerard. Some examples he gave were as follows:

Sanders, a large French feed supplier and Keenan have been working with 200 dairy farms in a 3G (gains for 3 parties) branded program to improve margins through feed efficiency. The project is now being expanded with inTouch being located in Sanders so they can create sustained value for large numbers of their 15,000 dairy and beef farming customers.

SleepEasi, a similar project, between Keenan and Dairygold Coop, a large milk processor and feed miller, is now set for major expansion and will help farmers expand production through improved feed efficiency and better herd health.

Gerard went on to say that large numbers of feed advisors and consultants throughout Britain, Ireland, France and Scandinavia are working with farming customers and inTouch.