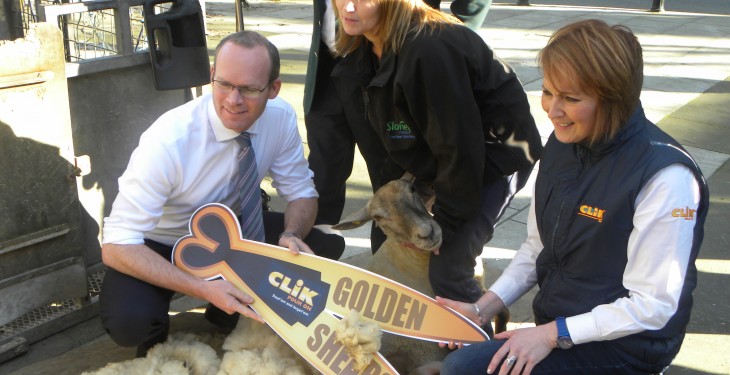 Shearing sheep with a hand shears has almost become one of the great forgotten skills of traditional farming in Ireland thanks to the speed and convenience delivered by shearing with an electric shears which is the most commonly used technique in the major sheep producing countries nowadays.

“The popularity of electric shearing is understandable when you compare the time it takes to relieve a sheep of its fleece using a hand shears – four minutes on average – rather than a machine shears – 30 seconds on average”, says George Graham, Chairman of the Irish Sheep Shearers Association.

So considering the levels of current wool prices and the labour rates charged by trained shearing contractors, it’s obvious that any farmer with a large flock of sheep for shearing this summer will be keen to have them fleeced as efficiently and quickly as possible.

But the flock owner who opts for the machine shearer is overlooking the benefits that the special skills of the hand shearer will bring to the job.

These include, for example, a neater cut, a cleaner look, less likely damage to the fleece, and less potential harm to the sheep. And not to overlook the extra benefit that the hand shearer brings by leaving that extra layer of wool on the animal rather than the very tight cut that results from shearing with a machine shears.

George Graham points out that blade shearing is practised in countries around the world where the shearer prefers skill to speed to do the job. And also, it is the only means of shearing sheep in the remote rural areas of some countries where there is no electricity.

“Blade shearing is still carried out in certain parts of Ireland, especially in the Western counties, and by farmers with small flocks who prefer finish to speed”, he said.

Seamus Joyce from Mayo, one of the country’s top hand shearers, and a member of the two-man team who will be competing for Ireland in the World Blade Shearing Championship in Gorey this month, said blade shearing is a delicate and important skill acquired with years of practice.

“Some wool is left on the animal and this is ideal for cold climates like Ireland where sheep need some protection from the elements“, he said.

Seamus farms 700 sheep on his farm overlooking Lough Mask. He won the Irish Blade Shearing Championship in Millstreet in 2013 and also won the title in Galway in 2005.

His team mate, Peter Heraty, farms 300 sheep on his holding near Croagh Patrick. He has competed for Ireland in the last two World Championships, in Wales in 2010 and in New Zealand in 2012.

Both will be up against the current world blade shearing champion, Zweliwile Hans from South Africa, who won the title two years ago in New Zealand. He is travelling to Ireland to defend his title and coincidentally he competed in Gorey when the world championships were held there in 1998.

The World Blade Shearing Championship, sponsored by Novartis Animal Health through their blowfly products CLiK® and CLiKZiN®, is one of the centrepieces of the World Shearing and Woolhandling Championships which take place from 22nd to 25th May.

Wishing the Irish team every success in the championships, Katherine Openshaw, Novartis Animal Health, said “Blowfly strike is one of the most unpleasant yet familiar annual problems that sheep farmers face. CLiK and CLiKZIN, the only Insect Growth Regulators with FleeceBind technology, prevent the development of the damaging second and third stage maggots which are responsible for blowfly strike and flock damage. The FleeceBind technology ensures the formulation spreads and binds to the lanolin in the fleece, offering full fleece protection* and a high resistance to washout, as well as ease of use and peace of mind to sheep farmers.”