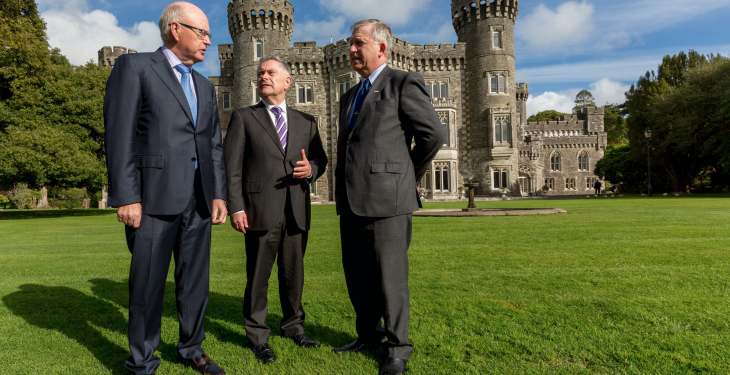 A €7.5m proposed development of Johnstown Castle in Co. Wexford was officially launched by the Minister for Public Expenditure and Reform, Brendan Howlin, today.

Teagasc, which own the Castle on behalf of the State, is partnering with the Irish Heritage Trust and the Irish Agricultural Museum, to undertake major conservation work on the Castle and to develop the heritage and tourism potential of the Castle and Gardens for the South East.

Teagasc is working closely with Failte Ireland so that this investment compliments its recently launched Ireland Ancient East tourism strategy.

Speaking at the launch, Minister for Public Expenditure and Reform, Brendan Howlin TD, said it was major boost not just for Wexford and the South East of the country but it will significantly contribute to Ireland’s tourism offering, particularly to Ireland’s ‘Ancient East’.

“This development aims to make Johnstown Castle the most visited attraction in the South East of Ireland and to greatly increase the amount of pleasure which people, from Ireland and abroad, obtain from the buildings and grounds of Johnstown Castle.

“For the first time, the Castle itself will be opened to the public to visit. It’s important to preserve such an historic building to a high standard for future generations to understand and enjoy their heritage.”

The original Johnstown Castle was built by the Esmonde family who had come to Co. Wexford from Lincolnshire in the wake of the Anglo-Norman Invasion in 1169.

Its ownership changed many times in the intervening years before it was gifted to the state and set up and run as a horticultural college from 1945 to 1960 and subsequently for agricultural research.

Over the last 20 years, Teagasc’s environmental research work has been transferred into purpose built laboratories and office facilities leaving the Castle itself available for this new development.

Funding of €5.0m is available for the project through the Department of Agriculture, Food and the Marine and a request for €2.5m in Failte Ireland funding is being considered by its board.