Irish milk production has continued to fall in 2017, with production in February dropping by 7.8% compared with the same month in 2016, the latest figures from the Central Statistics Office (CSO) show.

Domestic milk intake by creameries and pasteurisers was estimated at 264.8m litres for February 2017. This represented a decrease of 22.3m litres compared with the previous February (2016).

The level of milk production decreased from 434.7m litres in January of this year to 413.5m litres in February. This equated to a month-to-month decrease of 4.9%. 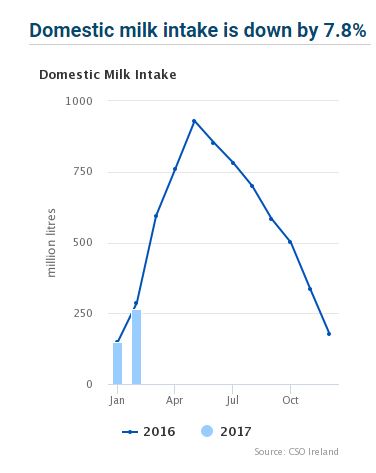 The year-to-year decreases (in milk production) follow on from a fall in production of 4.6% in the first month of 2017 (compared with same month in 2016).

When comparing February 2017 to the corresponding month in 2016, the total milk sold for human consumption decreased by 4.9 % to 39.4m litres, according to the CSO.

It was announced earlier this week that payments under the EU Voluntary Supply Management Scheme, totalling €6.5m, would begin to be issued to dairy farmers across the country.

The Minister for Agriculture, Food and the Marine, Michael Creed, announced that payments will start to run this week in respect of Phase I of the scheme.

The scheme was designed as a short-term market stabilisation mechanism; it was introduced by the EU Commission last year.

It was brought in as part of a range of measures to mitigate price volatility in the dairy sector.

I am pleased to announce that my Department has commenced payments under Phase 1 of this scheme which will see almost €6.5m paid out to 3,500 Irish dairy farmers, who applied for aid to reduce their production in the last quarter of 2016.

“This will provide a significant cash-flow boost to dairy farmers at an important time of year,” Minister Creed said.