Irish food showcase goes down a treat in Dubai 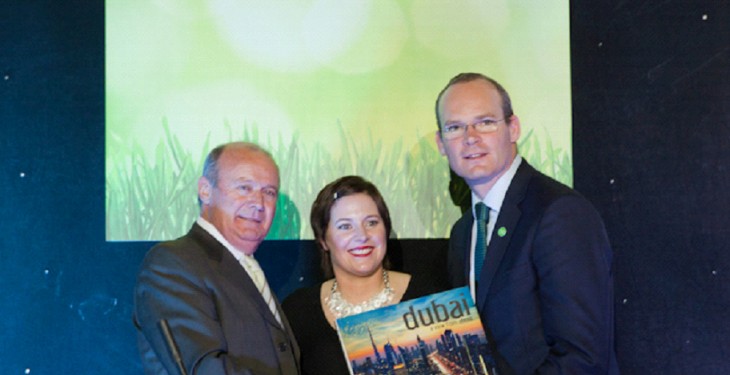 A week-long Irish agriculture trade visit to the Gulf States has concluded with a banquet at the Dubai Irish Business Network, where Minister for Agriculture, Food and the Marine, Simon Coveney, spoke to an audience of potential buyers and business partners at Bord Bia’s Taste of Ireland Green Box Competition in Dubai.

The competition was adjudicated by Derry Clarke from L’Ecrivain restaurant in Dublin. The event was designed to highlight the quality of Irish food products in a market where demand for food will be growing dramatically over the next decade.

Speaking at the event, Minister Coveney spoke of the range and diversity of Irish products available to the Gulf market.

“The range of Irish foods available and the variety of producers ranging from renowned international companies to smaller specialised producers is a winning mix both for the Irish economy and for prospective buyers and co- investors in this part of the world. The Gulf region is rich with potential for producers of quality food. I know that the unrelenting focus on quality from Irish producers and the warmth of the relationship between Ireland and Gulf countries is a sound basis for building sound and lasting business relationships.”

The Dubai event marked the culmination of a trade mission involving almost 40 engagements in a packed schedule across Abu Dhabi, Qatar, Dubai and Saudi Arabia. These included meetings with senior political and business figures in all four countries and with the Secretary General of the Gulf Co-operation Council.

The mission also included major investment announcements from the Kerry Group, which is investing in a technology and innovation centre in Dubai, and the Irish Dairy Board (IDB), which is investing more than €20m in a facility in Riyadh, which will manufacture soft cheese developed specifically for the Saudi Arabian and Gulf market using technology developed in the Teagasc/IDB innovation centre in Moorepark in Fermoy.

The minister also met with senior business figures and with regulatory officials and helped to open doors for the 35 agri-food and technology companies accompanying him on the mission.

“What I find most exciting about this mission is the business potential not only for Irish businesses in food manufacturing , but also in areas such as agri services, production engineering, dairy technology and food safety software.   These new areas for development are part of the ever widening footprint of the agri-food sector and what is critical  is that these businesses will now begin to open doors for each other as the reputation of Ireland as a centre of excellence for all things agricultural grows.”

Minister Coveney also spoke of the importance of capitalising on the contacts facilitated by the trade mission: “Already an Irish company called Biotector has signed a €5m contract for the supply of its process technology and all of the nine technology companies accompanying me on this mission have built significant business contacts.  I am certain that the business meetings facilitated as a result of this visit will have tangible outcomes for these companies in the very near future.”

The development of Ireland’s €1bn equine sector was also a significant focus of the mission which include meetings with Mohammed Bin Faleh Al Thani, a member of the Qatari  Royal family, Sheikh Hamdam Al Maktoum, Vice Premier and Minister for Finance in Dubai, and a number  other key investors in the Irish equine industry.

In concluding remarks on the final day of the mission, the minister said: “The synergies between the food security policies of the Gulf States and Ireland’s Food Harvest Plan for the development of the food sector of obvious.  The peoples of the Gulf have also made a significant contribution to the equine sector in Ireland and there is further potential for investment. In leading the biggest ever agri-food trade mission to this region, my focus was to build the profile of Ireland as a source of high-quality food and agri technology, to develop key political and official relationships and to open doors for Irish companies wishing to do business in the region. I am satisfied that those key aims have been achieved and the work done this week by the multi agency and private sector  team that accompanied me will result in tangible outcomes for those businesses and for the Irish economy.”