Cream of the crop sparkle at food awards

The cream of the crop of the Irish food and drink industry attended the sparkling Bord Bia awards in the historic setting of the Royal Kilmainham Hospital last night where success was clearly on the menu.

The Bord Bia Food and Drink Awards, designed to recognise the achievements of Irish food companies, was attended by more than 250 people, including industry top brass from some of Ireland’s leading food and drink companies, Kerry Group, Glanbia, Irish Distillers, ABP, Dawn Meats, Kepak to name but a few.

“Life is not about waiting for a storm to pass, it’s about dancing in the rain,” championed Michael Carey, chairman of Bord Bia, in highlighting the success of the agri-food industry in the face of challenging economic difficulties.

Success was a key theme throughout the night. Given the assembled audience, positive food for thought came from Minister for Agriculture, Simon Coveney, who stressed the mission that Ireland will become the world’s premier food producer in the coming years.

The main course of the minister’s speech outlined some of the industry’s achievements to date.

“At a macro level, the record €9bn exports achieved by food and drink companies in 2012 is likely to be surpassed this year and the €12bn target in Food Harvest 2020 is in sight. The opening up of new markets has been a key policy priority. Together with the successful conclusion of the Common Agricultural Policy and Common Fisheries Policy negotiated during the Irish presidency, this provides greater certainty for food and drink businesses seeking to expand business sustainably on the Origin Green journey.”

Nobody rarely leaves a Bord Bia event hungry and last night was no exception. A wonderful variety of Irish food was served up to the lucky guests.

For starters there were a number of options from Ardsallagh goat’s cheese to buffalo mozzarella, the main course choices of fresh Clare Island salmon, Dublin Bay Prawns or succulent braised shoulder of lamb. Just desserts was a host of tantalising options including chocolate and caramel tarts and raspberry vanilla cream trifles among more.

The grand finale of the night was the awards ceremony itself. There was stiff competition from wonderful food companies across Ireland who were all winners in their own right.

First up to the podium was Britvic, owners of the successful MiWadi brand, that won the home category. Next to claim a prize was Irish Atlantic Salt, which won the entrepreneurial award. The family-run business has developed a range of organic, gourmet Irish sea salt products, using the highest quality waters around the Beara Peninsula to create the only Irish-made white sea salt product available.

The winners in the hotly contested branding award were Keelings. The fresh produce business started producing fruits and salads in the 1930s and today the company employs approximately 2,000 people and has a turnover of €300m per year.

The export award went to Cork’s Glenmar Shellfish. Established more than 30 years ago, it is currently exporting more than 2,000 tonnes of shellfish each year to markets such as China, Hong Kong, Korea, Italy, Spain, France and Croatia.

Paganini, who produces a protein-enriched ice cream range, scooped the innovation award and to top it off guests were served its produce as dessert, to keep the energy levels in tact. Paganini produces two products FitFuel Nourish, which is used by healthcare professionals to boost the protein intake of patients and FitFuel Perform, which is a recovery product for sportspeople and recreational athletes.

The consumer insight award was won by Kerry Foods for Cheestrings. A brand, worth approximately €90m and available in some 25,000 stores around the world. Dawn Meats came out on top in the sustainability award. It is working to reduce water use by 40 per cent, reduce energy consumption by 40 per cent and to reduce their direct carbon footprint by 50 per cent.

A new addition to the ceremony was the award for online champion, in recognition of the impact the digital age is having on the industry. Pat Whelan of James Whelan Ireland’s first online butcher was awarded the title as a best-in-class example of how to increase sales and brand awareness through online and social media.

After dinner drinks were provided by Irish Distillers Pernod Ricard. Needless to say for the overjoyed winners and indeed all the guests the party continued well into the night. 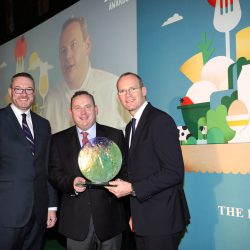 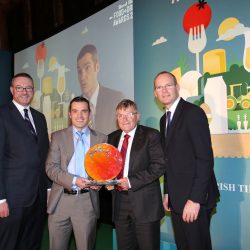 Michael Carey, Chairman, Bord Bia, Barry and Tomas Murphy both from Paganini, winners of the Innovation Award category for FitFuel and Simon Coveney TD, Minister of Agriculture, Food and the Marine 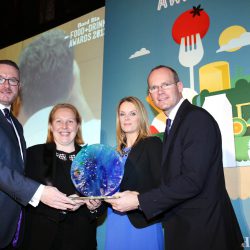 Michael Carey, chairman, Bord Bia, Leonie Doyle and Dee Cunniam both from Britvic Ireland winner of the Success at Home Award for its MiWadi range and Simon Coveney TD, Minister of Agriculture, Food and the Marine 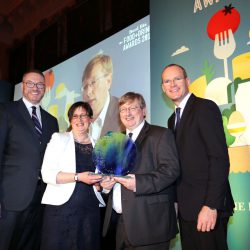 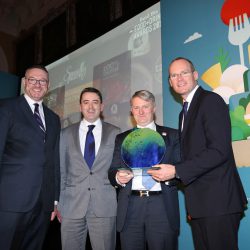 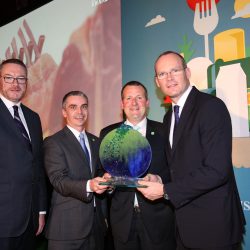 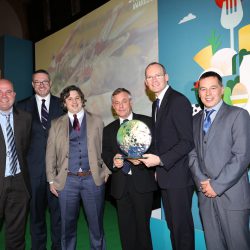 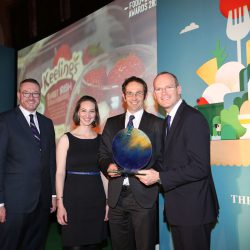 Michael Carey, Chairman, Bord Bia, Laura McDonnell and David Keeling both from Keelings winner of the Branding Award and Simon Coveney TD, Minister of Agriculture, Food and the Marine