This week at Agritechnica Deutz-Fahr is introducing two new tractor ranges. It said the new offerings bring its high-power applications to new levels.

Deutz-Fahr claims its new 9 Series, with outputs from 270hp to 340hp gives it customers extra choices of high power machines with a range of models that follows on from its award-winning 7 Series. It claims the 9 series offers operator comfort, fuel efficiency and low operating costs.

It says the tractors also benefit from a style that has been developed and refined in collaboration with Giugiaro Design and has clear and decisive lines for the hood. 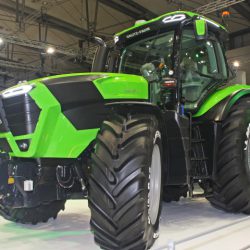 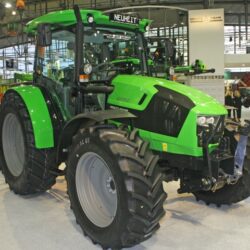 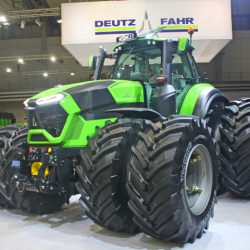 Deutz claims the 9 series cab is distinctive and has uses a generous amount of high-quality materials that it says results in an aggressive yet user-friendly design. The 9 series comes with a 7.8l Deutz engine with Tier 4final and TTV transmission which together achieves 60km/hr at 1780rpm.

Also on show in the Deutz-Fahr stand at Agritechnica this week is the highly anticipated 11 Series, which has a range of high-power tractors having a conventional build, continuously variable transmissions and power outputs up to a mighty 440hp.

For the mid-power market, Deutz- Fahr is introducing the 5C Series at the event. It claims the series contains a range of versatile tractors from 90hp to 120hp derived from the high performance 5 Series.

Also at the event the company’s popular 6 series gains new four cylinder models from 120hp to 140hp and high output variants up to 210hp.

The Deutz-Fahr combine harvester line-up is also updated and now includes the new C9000 Series. It says this harvesting machine was conceived to set new standards for efficiency with a host of important technological innovations and solutions to maximise output.