‘Irish farmers are not getting value for money on fertiliser prices’

Irish farmers are not getting value for money on fertiliser purchases. Maybe it’s time they started playing hard-ball?

The European Commissioner for Agriculture, Phil Hogan, recently formally wrote to the EU Competition Commission highlighting concerns that fertiliser prices have not fallen in line with collapsing EU energy prices.

With over 80% of ammonia production costs tied up in natural gas costs, why haven’t falling natural gas prices been reflected in lower fertiliser prices?

The Europe fertiliser lobby has been quick off the mark to defend their positions, highlighting unrest in the Middle East, trouble in Ukraine etc.

Ironically, Fertilizer Europe in its own promotional material is quick to point out that imports account for just 19 – 21% of total nitrogen fertiliser consumption in Europe.

There is no shortage of global fertiliser capacity

The total urea install capacity across western and central Europe stands at about 5m tonnes. Yet, across the rest of the world, capacity has increased by over 16m tonnes in the past five years.

Global urea capacity is expected to grow by a further 5m tonnes in 2015 alone.

Which brings us back to Ireland. Two interesting issues arises when you look at available urea data. Firstly, as shown in the table below, there is a large variation in the year-on-year price difference between the price at which urea is landed portside in Ireland and the actual retail price paid by farmers.

Secondly, as shown in the graphs below, the notion that Ireland cannot competitively purchase fertilisers at competitive prices is a bit of a myth.

We see a strong correlation between CSO urea figures and calculated ‘spot market’ prices were the product to be delivered portside in Ireland.

Ireland is not the marginal fertiliser market it is made out to be. On the contrary, due to our grass-based production systems, Ireland is one of the leading (8th largest) and most efficient users of nitrogen-based fertilisers in Europe.

Surely the more cynical dairy farmers will question why such a massive price spread existed when milk prices were at a record high, only to ease back in a softening dairy market?

CAN 27.5% prices are equally as intriguing.

It is important to first understand the fertiliser production process. From natural gas, the first product made in a fertiliser plant is ammonia, which is 82% Nitrogen.

From ammonia, urea is made, which contains 46% Nitrogen, (hence the name Urea 46). urea is then used to make Ammonium Nitrate (34% nitrogen), which in turn is combined with Calcium Carbonate (i.e. ground limestone) to make Calcium Ammonium Nitrate 27.5% nitrogen (CAN27).

As we can see, the price of CAN should correlate with fluctuating ammonia and urea prices.

So, why hasn’t the retail price of CAN in Ireland budged an inch over the past three years as shown in the graphs?

Never before has maintaining cost competitiveness been more important for Irish farmers.

Accordingly, Minister Coveney and industry policy makers should take the necessary steps to confirm that the Irish fertiliser market is both transparent and competitive in this new free market era. 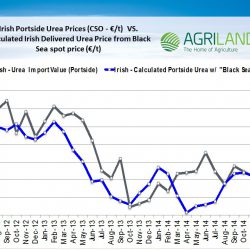 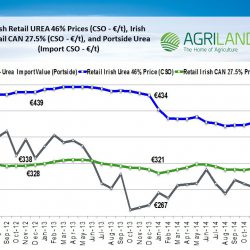 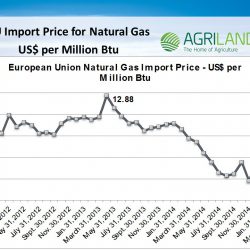 Judge rules that horse feed case should be heard in Ireland