Irish fans spring to the top of John Deere

John Deere fans Peter Gaffney from Lusk in Dublin and Ned Furlong from Wexford are the Irish winners of the company’s European ‘biggest fan’ photographic competition, which has been running on the John Deere website since August and attracted more than 500 entries.

Visitors to the site were invited to ‘grab their gear’ and submit a photograph of themselves to illustrate their commitment to the brand. The winning Irish photos will be featured along with seven other fan photos from Austria, France, Germany, Poland and Switzerland in the next official John Deere Collection merchandise catalogue, which will be available free from January 2014 at all John Deere dealers. Peter and Ned also receive a personalised John Deere mug as a small thank you gift.

“I am truly delighted with the news of being one of the John Deere ‘biggest fan’ winners,” said Peter Gaffney, who works for a local Lusk firm, McNally Joinery. Peter is pictured with a small part of his John Deere collection, much of it acquired from his local John Deere dealer Hanlon Machinery at Donabate, Dublin.

“I have been a fan since the age of 13, when it all started as a school project on agriculture around the world. Long before e-mail, I wrote letters to various worldwide manufacturers of agricultural machinery, but the only reply I got was from John Deere in the US – a man called Dick Sellon, who worked as an export co-ordinator at Moline and is now retired, wrote back to me and we still keep in touch. Needless to say, the rest is history.

“I have since visited various John Deere factories and facilities in the US, Germany and England and have a collection of literature, photos, models and various merchandise pieces, as well as being the owner of two classic John Deere tractors from the 1980s – a 2140 and a 2250 – and a ride-on mower.

“A good friend of mine, Michael Hoey, is the owner of Country Crest Farming, and he and his brother Gabriel along with other friends in the farming community, including the Flynn family and Eamonn Murphy, have kindly allowed me to drive various John Deere tractors and machines over the years. Michael persuaded me to enter the competition after he saw an article in Irish Farmers Journal.

“I should also thank my wife Maureen and children Tadhg and Aine, as they have bought various John Deere items for me, along with going to see wherever a tractor, combine or anything else green and yellow might be working! This really is a dream come true for me.”

Ned Furlong keeps 100 ewes and grows an acre of strawberries for public sale. He bought his first John Deere tractor, an 1120, around 30 years ago for spraying his strawberry crops, and has since built up a collection of 12 models (Ned is pictured with the tractors and his sheepdog Gem), all in working order, plus a John Deere plough.

Ned buys all his tractor parts and John Deere merchandise from local dealer Templetuohy Farm Machinery at Enniscorthy in Co Wexford. “The John Deere parts system is great, I can always get what I want, even for the 303,” he said.

“I saw an article about the competition in the Farming Independent, but I never thought any more about it. My son Sean then looked it up on the John Deere website, and it was my wife Helen’s idea to get all the tractors lined up for the photo. I didn’t expect to get anywhere with it at all, so it was a lovely surprise to hear I’d won.”

All the competition winning photos can be seen on the John Deere website, www.johndeere.co.uk/biggestfan.

Pictured above Peter Gaffney, who works for a local Lusk firm, McNally Joinery, and below Ned Furlong who buys all his tractor parts and John Deere merchandise from local dealer Templetuohy Farm Machinery 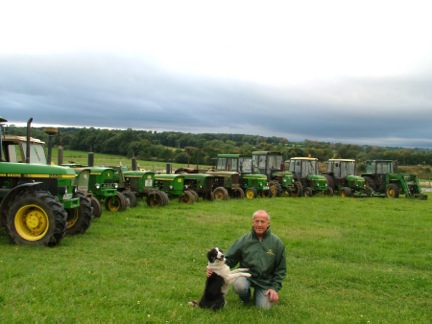