Irish dairy exports for the first seven months of 2015 are down on the corresponding period in 2014 by €55m, Central Statistics Office (CSO) figures show.

In the period from January to July last year, Ireland exported €7.5m worth of dairy product to Russia. Compared to the same period this year, there’s been a decrease of €7m.

This decrease to Russia can be attributed to the current Russian embargo on imports which includes a range of agricultural products from the EU, the US, Canada, Australia and Norway.

This embargo is to continue until August 2016, the Russian government announced in June 2015.

Ireland’s largest dairy businesses have been warned over their exposure to a slowing Chinese economy in the latest analysis by researchers at the Economic and Social Research Institute (ESRI).

In its Quarterly Economic Commentary, Autumn 2015, it said that there are concerns, from an Irish perspective, that a continued slowdown in China could have a damaging effect on agriculture and food markets, particularly given the weakness in the Irish sector in 2015.

Looking closer to home, dairy exports for the first seven months of the year to Northern Ireland are down €5.6m on the corresponding period last year. Exports of dairy products to the North stood at €43.1m in July.

Dairy exports to the United Arab Emirates (UAE) are down €8.1m and the amount of dairy products Ireland exported to Saudi Arabia in the first seven months of the year are down €1.6m.

In positive exports news, the amount of dairy product Ireland sent to the US in the first seven months of 2015 is up €10.1m to €38.7m, CSO figures show. 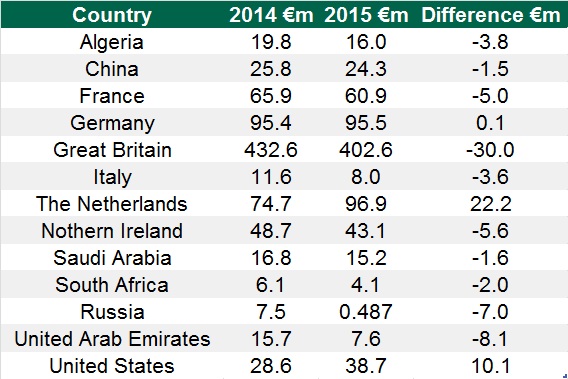