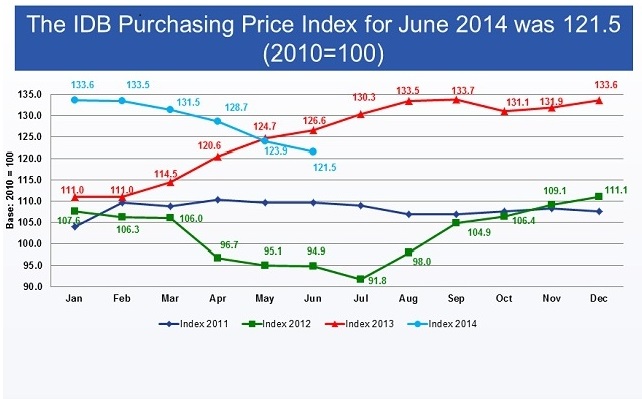 The Irish Dairy Board’s (IDB) Production Price Index (PPI) for June was down 1.9% on the April return and is now at its lowest level in 13 months.

The Index is now trending downward with falls in the last five months. This follows on from a fantastic 2013 for dairy returns, with the index having only fallen once since January 2013.The June result comes on the back of prices paid at last week’s Fonterra dairy auction being down by 4.9%, compared with those recorded at the event held on May 17.

It followed a marginal increase at last month’s dairy trade auction. However, prior to that, eight auctions in a row have seen price falls since February.

The IDB released its monthly PPI this week and it showed a return value of 121.5, which indicates a 21.5% increase in market returns when compared to 2010.

January of last year saw the Index start the year at 111, it then rose significantly over the spring and summer months peaking in September at 133.7. It is now 12% of that high.