Irish beef accounted for 80% of UK beef imports in August 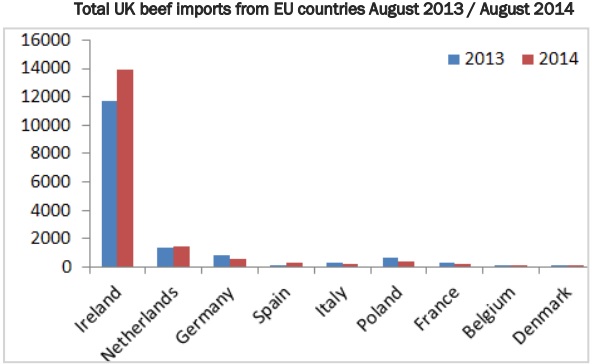 Irish exports of beef to the UK accounted for 80% of its total beef imports from EU countries during August 2014 according to the Livestock and Meat Commission (LMC).

It says imports from all other EU countries during the month totalled 3,296 tonnes, just under a quarter of the total imports from Ireland.

The latest LMC figures show that Ireland continues to be the largest exporter of beef into the UK with 13,912 tonnes exported during August 2014 compared to 11,710 tonnes in August 2013. This is an increase of 2,202 tonnes and accounts for a 19% increase in the volume of Irish exports year on year.

The LMC says year to date figures show that UK beef imports from Ireland for the period January to August 2014 totalled 111,000 tonnes, a 12% increase on the 99,000 tonnes imported in the corresponding period in 2013.

Beef imports from the Republic of Ireland for the 2014 period accounted for 79% of total imports from EU countries compared to 76% of imports in the 2013 period.