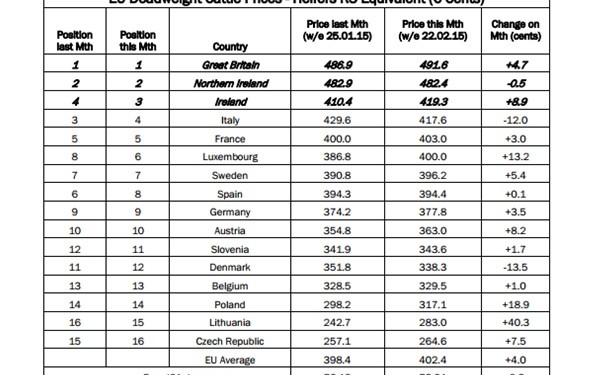 The latest Livestock and Meat Commission (LMC) results show that deadweight beef price for cattle in Ireland continues to improve with the price of an R3 heifer 419.3c/kg in the week ending February 22, 2015.

The LMC says that the average R3 heifer price in the EU was 402.4c/kg, up 4.0c/kg from 398.4c/kg in the week ending January 25. The figures show that Ireland continues to offer a higher price than the EU average and it has regained it’s third place spot on the EU league table from Italy.

The UK has retained the top spot in the EU league table of R3 heifer prices with an equivalent price of 491.6c/kg, the LMC says and this is an increase of 4.7c/kg from the week ending January 25, it says.

The LMC says that the increase in the UK R3 heifer price resulted in the UK/EU price differential widening from 88.5c/kg in the week ending January 25 to 89.2c/kg in the Febraury 22.

In Northern Ireland the equivalent price of an R3 heifer was 482.4c/kg, down 0.5c/kg from 482.9c/kg in the week ending January 25 and the North retains its second place on the EU league table.

The Republic’s price for an R3 heifer is 63.1c/kg lower than the equivalent price in Northern Ireland.

The latest figures also show that prices in the Republic, Northern Ireland and the UK are marginally down from the week ending February 15.