Is Ireland ready for dairy expansion?

Over the past 15 years, Ireland and Europe has seen significant consolidation of the dairy sector. Of the top 25 dairy companies headquartered in Europe in 1997, only nine remain today.

At home, we have seen Avonmore and Waterford merge in 1998 to form Glanbia. Aurivo was formed when Shannonside, NCF, Kiltoghert and Donegal Creameries joined forces and Arrabawn is the result of a merger between Nenagh and Midwest.

The number of farmer-owned co-ops in Ireland, New Zealand and Denmark has dropped dramatically – just three remain in New Zealand from a high of 95 in 1970. In 2013, the value of Ireland’s dairy industry was close on €3.7 billion.

We exported more than €3 billion worth of this or 85 per cent our what we produced. However, it pales when compared to the likes of Arla and FrieslandCampina. Arla sales exceeded €10 billion, while FrieslandCampina’s figure is in the region €11 billion. Looking at the statistics around processing in Ireland, some key questions arise:

Arla processes 92 per cent of the country’s milk in 20 plants. The number of processing plants in Ireland has reduced by 33 per cent, from 42 processing plants in the 1980s to 28 today. For many, Ireland’s dairying future means taking on Denmark and New Zealand. New Zealand has been producing milk unrestricted since the mid 1980s and even though it produces only 3% of the world’s milk supply, it accounts for 37 per cent of global milk product trade volumes.

Denmark, through its co-op mergers, sees one co-op (Arla) process over 12.5 billion litres of milk every year. With Ireland’s milk production expected to grow by 30-50 per cent by 2020, the industry cannot depend on the stagnant European market to absorb the extra volumes. It must look further afield, with many looking to Asia and Africa to provide these markets.

From our analysis of international dairy economies, it is clear that large-scale companies have evolved to better compete in today’s global dairy commodity market. That said, innovative smaller dairy companies have also survived by focusing on their own unique value proposition. What route Ireland decides to go down remains to be seem and some key questions are still unanswered.

If the answer to any of these questions is no, then serious change has to happen, But, until we seriously debate and answer these questions and the industry develops a clear strategy for itself its stakeholders cannot plan ahead. It’s time all the key stakeholders come together, review the current situation and look at out future options and where we want to go. If we fail to plan, then we must prepare to fail. 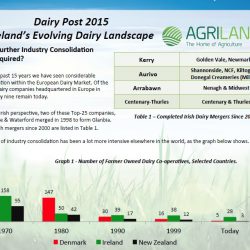 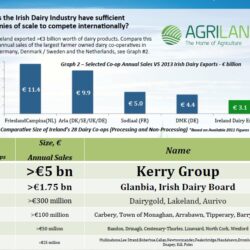 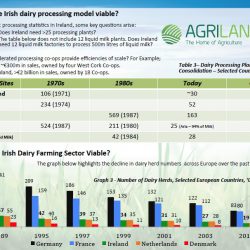 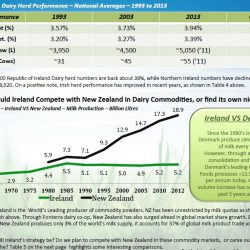 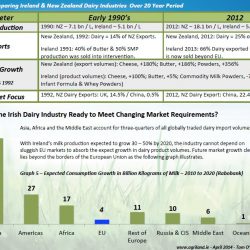