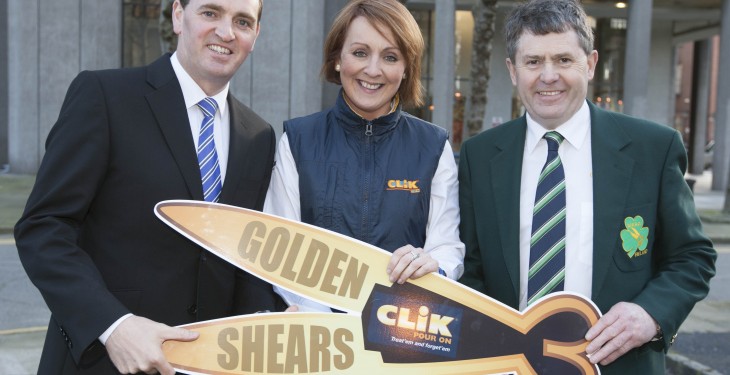 The Golden Shears World Blade Shearing Championship, which will be held in Co. Wexford in May, will be sponsored by Novartis Animal Health through their two blowfly protection products, CLiK® and CLiKZiN®, it was announced today.

The Blade Shearing Championship is one of the three major events in the Golden Shears World Sheep Shearing & Wool Handling Championships which take place in Gorey from 22nd to 25th May.

Over 600 of the world’s top shearers from 30 countries will be competing for a series of titles during the five days of the championships. Country teams will be competing in three disciplines – Blade Shearing, Machine Shearing and Wool Handling – for world individual and team titles.

In addition, top shearers from home and abroad will be competing for individual titles in the All Nations and the All Ireland competitions which will also be held during the week.

At the launch of the event recently Agriland caught up with Minister for Agriculture Simon Coveney among others:

The Chairman of the Organising Committee, George Graham, welcoming Novartis Animal Health’s involvement, explained that blade shearing rather than machine shearing is practised in all sheep producing countries around the world where the shearer prefers skill to speed to do the job.

“It’s wonderful that Novartis Animal Health is supporting blade shearing which is such a delicate and important skill. With blade shearing, some wool is left on the animal and this is ideal for cold climates where sheep need some protection from the elements during the year. Also, it is important to remember that there are still some areas in the world where electricity is scarce and consequently blade shearing is the only option”, he said.

“We are looking forward to welcoming the world’s best shearers to Wexford where these championships are being held indoors in a specially constructed shearing dome where people will be able to enjoy the ‘Olympics of shearing’ in comfort,” he said.

Katherine Openshaw, Novartis Animal Health, said “Our company’s involvement with shearing competitions in Ireland stretches back over 20 years and we are delighted to be supporting the Golden Shears World Blade Shearing Championships through our two products, CLiK and CliKZiN which are the only Insect Growth Regulators with FleeceBind™ technology.

“Blowfly strike is one of the most unpleasant yet familiar annual problems that sheep farmers face. CLiK and CLiKZiN prevent the development of the damaging second and third stage maggots which are responsible for causing blowfly strike and flock damage. The FleeceBind technology which is unique to CLiK and CLiKZiN ensures the formulation spreads and binds to the lanolin in the fleece, offering full fleece protection* and a high resistance to washout, as well as ease of use and peace of mind to sheep farmers,” she said