The Republic of Ireland has dropped two places to seventh on the EU deadweight cattle prices league table, figures from the Livestock and Meat Commission (LMC) show.

This latest price places the Republic just 0.2c/kg above the EU average price, the figures show.

Italy, France and Luxembourg have all overtaken Ireland on the league table.

Northern Ireland has been knocked off the second-place spot by Sweden and the average R3 heifer price in the North for the week ending October 4, was the equivalent of 440.7c/kg.

The price differential between the Republic and the North is now the equivalent of 47.7c/kg.

Britain retains the top spot on the league table with an equivalent price of 483.9c/kg in the week ending October 4. 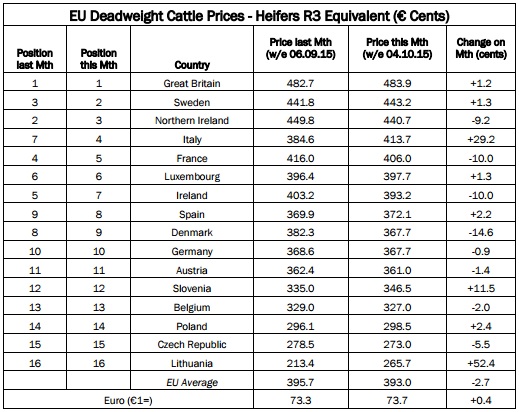