The Republic of Ireland has dropped to sixth place on the EU deadweight cattle prices league table, figures from the Livestock and Meat Commission (LMC) show.

This latest drop in price means the Republic is just 4.1c/kg above the EU average cattle price of 393.9c/kg.

Northern Ireland has also dropped one place on the cattle league table; it now holds third place after it was overtaken by Sweden.

This latest price in the North places the price in the Republic 51.5c/kg lower than the equivalent price in Northern Ireland, according to the LMC.

Britain continues to hold the top spot on the league table, with an equivalent price of 487.3c/kg in the week ending September 27.

This was an increase of 7.3c/kg compared to week ending August 30 when it was the equivalent of 480.0c/kg. 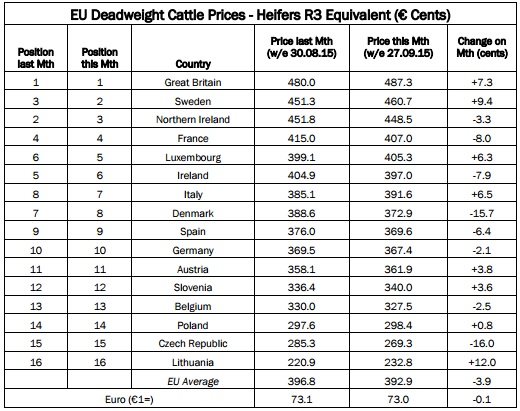