John Doyle first joined the Teagasc Better Sheep Farm Programme in 2012 and since then the farm has under gone some major changes.

On Thursday, the Co. Wexford farmer opened the gates of his farm to over 100 farmers to highlight some of the changes that have taken place on his enterprise.

Doyle runs a mixed farm consisting of 330 ewes, 90 ewe lambs, a herd of 18 suckler cows and a tillage enterprise on the 72 hectare farm in Ballindaggin, Co. Wexford.

One of the changes on the farm was the introduction of a paddock grazing system and Doyle explained that since this system of grazing was installed it has paid dividends.

Since the paddocks were installed, he said that the quality of the grass offered to sheep has improved and in turn lamb performance has also increased.

The installation of a paddock system has allowed the farmer to nearly double ewe numbers without bringing any additional land into the system.

Prior to installing the paddock grazing system, Doyle said that the ewes and lambs on the farm were not making the best use of grass.

He said that flock of ewes were spending too long in each field and as a result the grass regrowth was taking a hit.

Now, he said the ewes and lambs are spending approximately three-to-four days in each paddock, which has been beneficial in terms of ewe and lamb performance and grass growth.

The grazing block is now split into a number of  three acre paddocks and each paddock can be subdivided into 1.5ac paddocks once the lambs are weaned, keeping the time spent in each paddock to a minimum.

Doyle explained that grassland management has become an important part of his business and he stressed the importance of moving lambs to the next paddock.

Once the lambs graze to 6cm they are moved to the next paddock, grazing any lower would have a knock on effect on performance.

Dry ewes are then used to clean out any of the remaining grass on the paddocks, he said, which has helped to maintain lamb performance, with lambs currently gaining 200g liveweight gain per day.

To maintain this level of performance the Co. Wexford farmer is following strict grazing guidelines and he targets pre-grazing covers of 1,200kg Dry Matter per hectare for his sheep enterprise.

He also explained that the suckler and sheep enterprise runs hand-in-hand, with the suckler cows used to graze any of the heavier grass covers on the farm.

Since joining the programme, the ewe flock on the Doyle’s farm has increased substantially, moving from 200 ewes in 2012 to the present flock of 330 ewes. 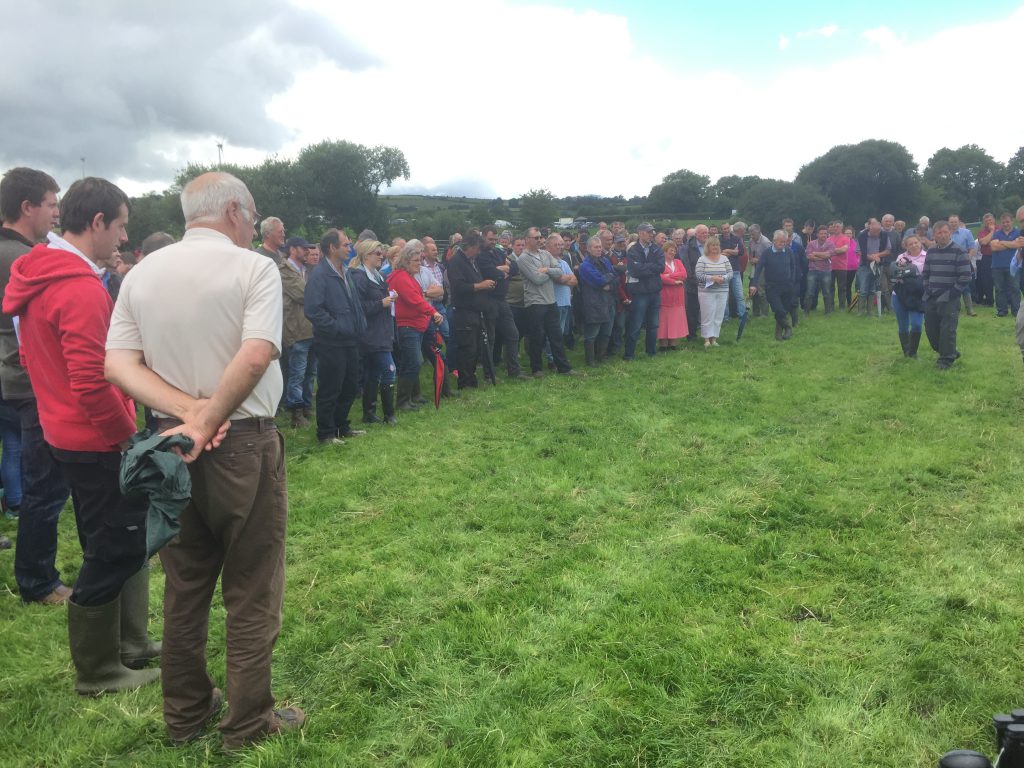 And it doesn’t stop there, Doyle said that he plans on increasing ewe numbers to 400 in the coming years, while also lambing 50 of his home-bred Belclare and Suffolk cross ewe lambs.

To manage lamb such a number, Doyle has changed the lambing pattern on farm, with the ewes split into three groups for lambing.

The Better Sheep farmer has split his ewes into an early lambing (130 ewes) and mid-season lambing (200 ewe) flocks.

The first batch of 90 early lambing ewes begin to lamb on December 27, while the remaining 40 ewes lamb from January 6 onwards.

Video: Take a closer look at the replacement ewes lambs

The move to increase ewe numbers has lead to the farmer selling an additional 300 lambs on an annual basis, while the number of lambs weaned per ewe has also increased to 1.62 lambs in 2016.

One of the key aims on Doyle’s farm is to maximise the contribution of grazed grass in the lambs diets, while minimising the amount of meal used in finishing lambs diets.

The lambs born to the mid-season flock are finished primarily of grass, he said, with grass accounting for 85% of the lambs total diet.

However, concentrate supplementation is a little higher for the early born lambs, which are weaned at eight weeks of age and finished on a diet of grass and concentrates.

And, last year all of the lambs born on the farm were slaughtered before Christmas.

Teagasc Drystock Advisor Martina Harrington was on hand to discuss the improvement in profitability on the farm since joining the programme in 2012.

Harrington said that the gross margin on the farm has nearly tripled over the last three years, moving from €300 per hectare in 2012 to €887 per hectare last year.

She said that the every hectare of the sheep enterprise is producing a gross output of €1,813 per hectare with variable costs coming in at €926 per hectare.

However, she said there was scope to further improve the profitability of the business by bringing increasing the number of lambs reared per ewe from 1.62 to the target of 1.7 lambs/ewe.