Huge variation in the cost of fallen farm animal collection

The cost of collecting dead cattle varies depending on the age, with most knackeries having six age brackets.

Price in euro, cost of delivering animal to knackery yard in brackets.

Sean Phelan’s Animal Collection Service in Mullinavat, Co. Kilkenny had the largest variations in their collection fee, with it rising to €50 in some cases.

Other companies, such as John Greene’s Animal Collection Service in Ahascragh, Co. Galway, charge a collection fee of €15 across all categories.

The cost of the collection of dead sheep varied between €30 and €50, with Larry Earle’s Animal Collection Service in Camolin, Co. Wexford  being the dearest at €50, while the other animal collection service companies charged €30.

Midland Animal Collection Service in Strokestown, Co. Roscommon in general, do not collect fallen sheep, with most farmers deciding to deliver the animal to the yard themselves. 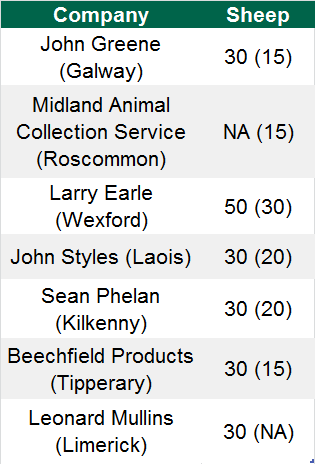 Price in euro, cost of delivering animal to knackery yard in brackets.

Newborn lambs are generally delivered to the knackery yard by the farmer, with the cost of disposal varying between €1 and €5.

Under the Department of Agriculture’s Fallen Animal Scheme (TSE Subsidy) the collection of dead cattle over 48 months of age was subsidised, with the farmers’ contribution capped at €55.

Cattle under 48 months are not included in the subsidy scheme, and their collection and rendering is seen as a commercial service, according to the Department.

Top tips on keeping your calves healthy at weaning