Hope to study agriculture in September? This €1,000 bursary could help! 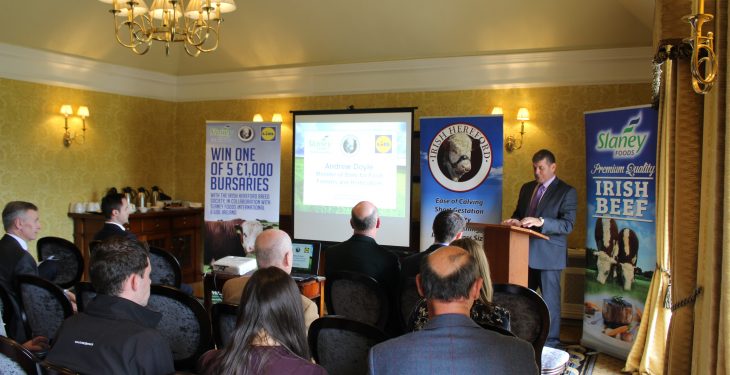 Are you hoping to go to an agricultural college or study agriculture at third level in the Republic of Ireland this September?

If you are then you could be in with a chance of being awarded a bursary of €1,000 from the Irish Hereford Breed Society, in collaboration with Slaney Foods International and Lidl Ireland.

Five bursaries of €1,000 each will be awarded to five successful applicants to the programme at the 85th National Ploughing Championships which will take place in Screggan, Tullamore, Co. Offaly from September 20 – 22, 2016.

The launch of the programme took place at the Radisson Blu St. Helens Hotel, Dublin 4 on Thursday August 4 and it is expected to create wide interest from prospective and aspiring agricultural students.

Prospective applicants to the programme could be students who may have completed the Leaving Certificate, could currently be actively farming or may be actively involved in their local Macra club or other agricultural activity.

To be in with a chance of winning one of these bursaries, candidates should submit an assignment entitled: Environmental Sustainability – the Challenges for the Irish Beef Sector (maximum 2,000 words) with their name, address and contact number clearly displayed on their assignment, by e-mail no later than Friday September 2, 2016 to [email protected]

Some 10 qualifiers will be contacted by phone on Friday September 9, and will be required to attend at the Irish Hereford Breed Society Stand during the National Ploughing Championships in Tullamore where the selection of the final winners will be announced.

Given the recent demand for the Hereford breed and the success of the multi award winning Certified Irish Hereford Beef, the Society has initiated the current project enthusiastically supported by Slaney Foods International and Lidl Ireland.

Speaking at the launch of the programme, Larry Feeney, Secretary of the Irish Hereford Breed Society said it was important to look to the future and ensure that young people coming into the sector are educated to the highest standard.

He said women in agriculture, in particular, should be encouraged.

A growing population across the world will require into the future sustenance provided by the agricultural community, creating increasing demands on land and water resources, according to the society.

A highly educated new generation of producers and agricultural graduates will be required to ensure such demands are met in a sustainable way, it said.

The Irish Hereford Society together with Slaney Foods International and Lidl Ireland are pleased to provide this opportunity and assistance to those young students wishing to pursue a future in agriculture.

Rory Fanning, Managing Director at Slaney Foods said when the Hereford partnership first started there were 50 cattle a week being processed. That number, he said is now at 400 cattle a week.

Liam Casey, Commercial Director at Lidl, said European consumers are more and more looking for grass fed beef and Ireland has a story and reputation for producing top quality beef.

Also speaking at the launch of the programme was Minister of State Andrew Doyle, who said there are real challenges to get young people to look at agriculture as a real lifestyle. He said marketing and research is key to that

In case of queries, students may contact the Irish Hereford Breed Society Ltd. on 044/9348855