Importing grain is akin to bringing in an animal with foot-and-mouth disease, IFA President, Joe Healy has warned.

Speaking at the final of the FBD Young Farmer of the Year Competition last night, Healy said that farmers have expressed concerns about the presence of weed seeds in imported grain, which could have a negative impact on the Irish tillage industry.

Healy also said that the two boat loads of grain, which were at the centre of two separate protests, where of an inferior quality to the grain produced by Irish farmers.

The IFA President also urged farmers to make an effort to use Irish-grown grain in rations this winter to support struggling tillage farmers.

The first Teagasc estimates puts the overall 2016 Irish cereal harvest down 15% compared to last year, with yields of winter barley and oilseed rape disappointing on many farms.

However, winter wheat and spring barley harvested so far are reporting good yields and quality.

Looking further afield, the European Commission’s latest crop update says that continued hot and mostly dry conditions in much of Europe in July and August have led to a further reduction in the yield forecast for spring and summer crops.

According to the European Commission, the yield outlook for winter cereals is slightly improved thanks to favourable weather conditions in northern parts of Europe.

Overall, the yield forecast for total EU cereals dropped to almost 10% below last year’s level, and to 1% below the five-year average.

However, despite the falling yields in Europe, the International Grains Council is still forecasting a record world grain harvest this year.

With further upward revisions for wheat and maize (corn), the forecast for world total grains (wheat and coarse grains) production in 2016/17 is 23m tonnes higher month-on-month. 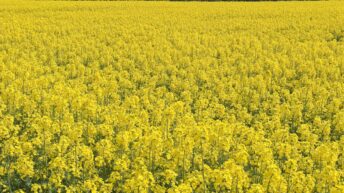