The IFA is in Brussels today pressing the case for an EU aid package to support tillage growers affected by the severe weather conditions earlier this year.

IFA has met with growers on a regional basis to assess the impact the severe weather this year had on farms and will present this information to members of the EU Agriculture Commissioner Phil Hogan’s cabinet in Brussels today.

Speaking today, Richard Kennedy said that the impact has been devastating for many farmers, with crops almost entirely wiped out in some individual cases.

Without financial support, these farms simply will not survive. 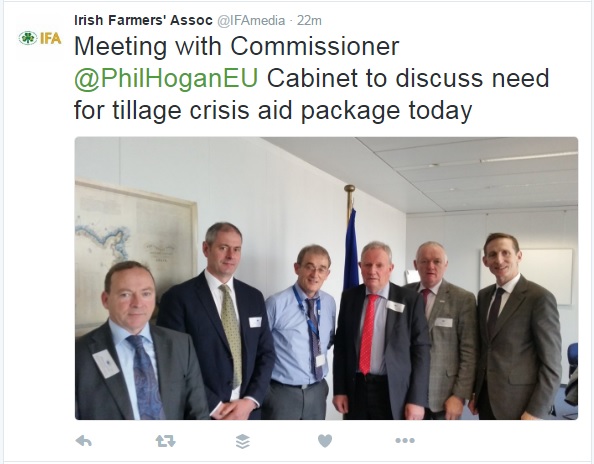 Meanwhile, Grain Chairman Liam Dunne said that poor yields and prices for a number of years, combined with convergence in Greening and Basic Payments and high input and working capital costs had already led to a very challenging income situation for tillage farmers.

“This once-in-a-lifetime situation has compounded the serious income situation on farms and requires a strong response.

“Our Government and Brussels must step up and support grain farmers who otherwise face financial ruin,” Dunne said.

Last month, a European Commission representative who addressed the issues facing tillage farmers at the European Parliament said that there would be no special tillage aid package for farmers.

The Commission representative told MEPs that he does not believe that such a measure will be introduced, as “Member States are not lobbying”.

Speaking about Ireland, he said that the good harvests in recent years have probably compounded the issue, as many farmers increased their acreage on the back of last year’s bumper harvest.

As many as 2,000 tillage farmers are estimated to be affected by this year’s tillage crisis, with tillage farmers in parts of the country losing in the region of €350/ac as crops are completely ‘wrote off’.

Tillage farmers: Where do you see the future of the sector going?