The European Commission must take action to resolve the income crisis facing farming, and especially the grain, dairy and pigs sectors, according to the IFA President Eddie Downey.

Speaking at an IFA organised protest outside the European Commission offices in Dublin today (Monday), the IFA President called the political powers to make changes to ease the burden facing farmers incomes. 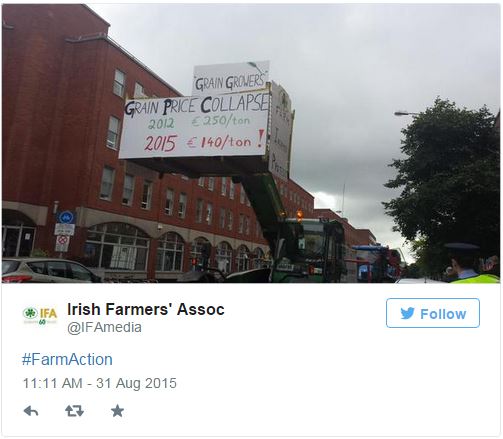 The current reduction in farmer’s incomes has been driven by political decisions made in Brussels, according to the IFA, and it says Minister Hogan must move to ease the burden facing Irish and European farmers. Downey says the advanced payment of the 2015 Basic Payment is needed to address the cash-flow problems on farm as farmers are dealing with difficult markets at the moment. 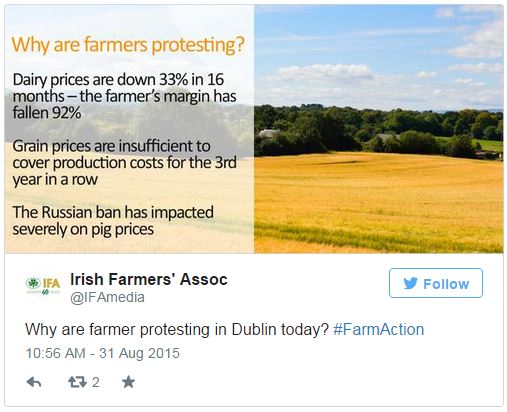 According to Downey the Russian ban has had a major effect on the price paid for Irish and European products, in particular the pig industry. “This displacement of product has placed it back on the European market and this has had a huge impact on our farms,” says the IFA President. 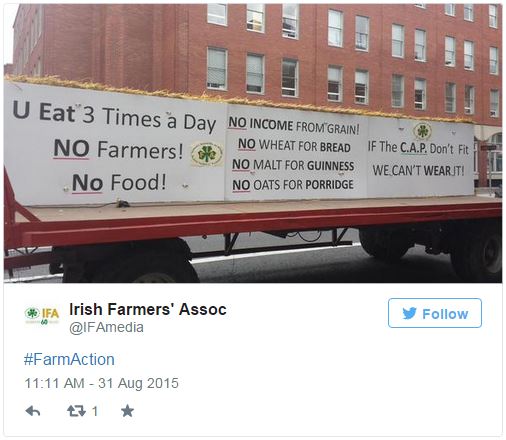 The IFA president has also called for changes to be made to intervention pricing as milk prices have fallen by over 40%.

“This is a huge drop in dairy prices, we expect prices to go up and down but the reality is that Europe needs to put a decent floor under the price.

The intervention price is too low and it is giving the wrong signals to the markets. It is quite simply giving the markets reason to keep cutting the price when we get into an over-supply situation.

According to Downey, an effective price floor is needed which will support the price and give confidence to market.

The IFA National Dairy Chairman Sean O’Leary also spoke at the event, dairy margins have fallen by 92% in the last 16 months and the EU Commission need to step in now to address this issue.

He added that the European Commission must move to address the intervention price in light of increased production costs to provide a genuine safety net.

“This would send an immediate and longer term message to global buyers that EU dairy products cannot be bought below cost,” he said.

According to O’Leary, the Commission will have a fund of over €800m worth of surperlevy fines paid by European over-quota farmers. This fund, nearly double what the EU 2016 Estimates budgeted.

Grain prices will struggle to cover production costs for the third year in a row, he said.

“Growers are forced to produce crops to satisfy bureaucratic requirements rather than respond to market signals.

“The lack of profitability in the tillage sector has resulted in a very significant fall in cereal production of close on 90,000ac since 2012,” he said.

IFA Pigs Chairman Pat O’Flaherty said pig farmers across Ireland and the EU is in a serious loss-making situation and it is critical that the Commission look to re-open markets particularly Europe.

The Irish family farm is also facing difficulty with the potential for trade deals to have an negative impact.

“All these trade deals sound wonderful from a trade basis but the problem here is the structure. They could potentially place unfair disadvantage on European farmers with the high cost of the inputs that we have on our farms.

“We have a very serious situation facing our family farm units. Ireland prides itself on that family farm structure, so we have to make a decision if we are going to hold onto it or not.

“At this point we are coming to a pinch point and Commissioner Hogan is in a key place to make these decisions,” he said.

He added that with family farms being so dependent on direct payments there can be no delay on payments this year.