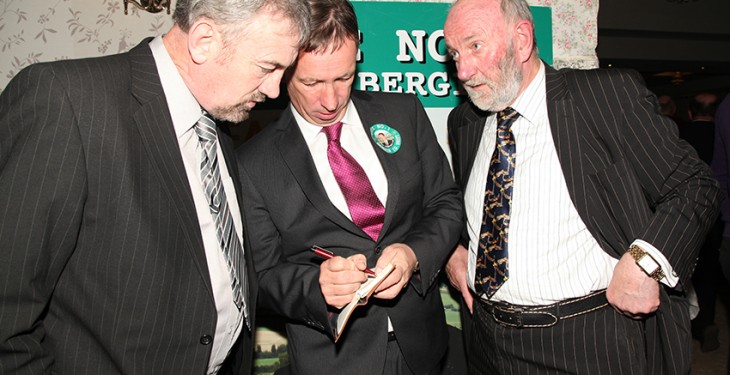 The restoration of the charter of rights for farmers and the introduction of a stimulus package to support farm development and expansion are among the top priorities of Irish Farmers Association (IFA) presidential candidate Jer Bergin.

Addressing more than 600 supporters at the launch of his campaign in Abbeyleix last night, Jer Bergin said the charter of rights, which was first introduced more than 15 years ago, has been effectively dismantled over the past four years.

“I am committed to negotiating a new charter which will restore respect to farmers as equal partners.  Farmers are progressively being treated as suspected criminals under an inspection regime that has become increasingly belligerent,” said Bergin in a statement to AgriLand.

He also committed to the introduction of a stimulus package under which low-cost, long-term finance would be available for targeted farm development and for sustainable expansion.  The package would be funded by the National Pension Reserve Fund and the European Investment Bank.  He said that without such a package the targets under Food Harvest 2020 will not be achieved.

Bergin said his track record, negotiating skills and vision make him the person best equipped to lead the IFA and represent the interests of all farm families.

“The IFA is a powerful voice for farmers.  But it must continually reinvent itself to ensure that it remains firmly focused on the issues that affect the livelihoods of farm families.  That requires a President with energy, courage and tough negotiating skills.   I will be a fresh voice for farmers and a President who will deliver results,” he said.

Bergin runs a suckler beef, tillage and sheep farmer with his wife Margaret and his brother Pat at Ballacolla, Co Laois.  He has more than 20 years involvement with the IFA at branch, county, regional and national level.

He is currently the IFA Leinster vice-president and also chairs the association’s climate change and renewables project team and its roads project team. He is a former vice-chairman of the IFA national livestock committee and has served on the IFA national council for 13 of the past 15 years.