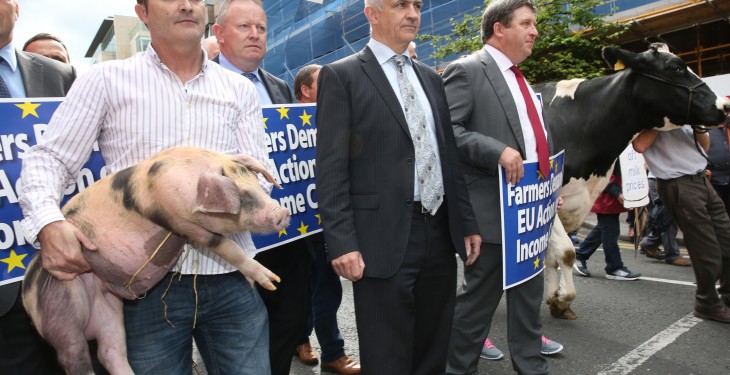 The IFA Pigs Chairman Pat O’Flaherty has survived another attempt to remove him from his post, albeit by the narrowest of margins.

However, talk has now turned to the possibility of the Pigs Committee facing a split as a number of pig farmers say they are not being represented properly through the Committee.

Last week’s meeting is believed to have been a fraught, but Pat O’Flaherty held onto his post as Chairman – but it took two votes before he was given the green light to remain.

The Chairman of the IFA’s Pigs Committee Pat O’Flaherty been under pressure in recent weeks and months to resign.

The buildup to the meeting goes back to last year, when three members of the Pigs Committee stepped aside in protest over the committee’s leadership after a fraught meeting in Portlaoise.

O’Flaherty’s leadership was challenged by three prominent members of the committee – Howard McCollum from the North region and Vice Chairman of the Pigs Committee; Colin Marry from the mid region and Tom Sherman from the South Region, also Chairman of the IFA’s DNA section.

At the time the main issue was O’Flaherty’s relationship, through his own branded pigmeat products, with a supermarket chain.

The three said the relationship made his position as Chairman untenable. However, the IFA backed O’Flaherty at the time and said he was doing an “excellent job” and working hard in “representing pig farmers on all issues”.

However, it seems though that the IFA memo backing O’Flaherty was not read or heeded by all the committee and the unrest continued over the intervening months.

Poor prices for pig producers didn’t help settle the situation and just before Christmas a number of members of the Pigs Committee wrote to Deirdre O’Shea, IFA Pigs Committee Executive, calling for O’Flaherty to step aside.

A meeting was scheduled before Christmas for Monday, January 4, and after a long and sometimes fraught affair a vote was taken on who should lead the Pigs Committee – O’Flaherty or Howard McCollum.

When counted, the vote was tied and a second vote was necessary. It is believed that at least one person abstained from voting in the first round and when the second vote was counted O’Flaherty had enough in his favour.

However, it leaves O’Flaherty in a tenuous position with just a year of his second two-year term as Chairman remaining, as he doesn’t have the backing of his full committee.

Further, O’Flaherty’s business affairs have caused consternation with some members of the committee.

O’Flaherty is listed as the Director of a number of registered companies, including AP Fine Foods. And it is understood that another Director of AP Fine Foods was on the IFA payroll for some time in 2015, carrying out official work on behalf of the IFA Pigs Committee. It is unclear how this contract was awarded.

When Agriland asked IFA about O’Flaherty’s links to business arrangements through the IFA Pigs Committee it declined to comment and O’Flaherty did not respond to our requests for a comment.

Incomes from external directorships of IFA personnel is set to come increasingly under the spotlight, after recent revelations which came to light as part of the revelations around Pat Smith’s remuneration, including what he was paid through directorships.