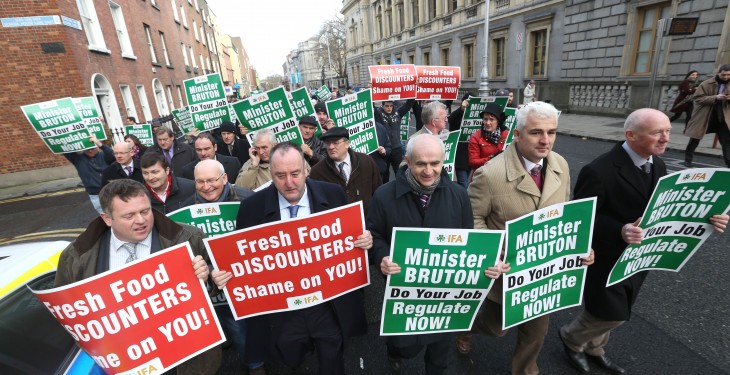 The Irish Farmers Association (IFA) is claiming that yesterday’s protests outside a number of retail stores in the Greater Dublin Area has forced the supermarkets to re-think their below cost of production strategies.

“The evidence is there courtesy of the ads in today’s national newspapers,” an IFA spokesperson continued.

“It is more than apparent that the supermarkets have taken their focus off the direct promotion of fresh fruit and vegetables. Bu this far form te end of the story. We are still calling on the Government to appoint a Food Retail Ombudsman, someone with the power to get to the bottom of how the supermarkets devise their selling strategies.

“And it’s important that Minister Richard Bruton addresses this issue as a matter of priority. We were promised action on this crucial issue months ago. But as yet the issue has not been discussed at government level. This must happen in the New Year.

“The reality is that the UK authorities are streets ahead on this matter.”

In January of this year Christine Tacon was appointed to the position of Groceries Code Adjudicator in the UK.

In the role Tacon was responsible for enforcing the Groceries Supply Code of Practice, designed to make sure large supermarkets – with annual turnover of over £1bn sterling each – treat their suppliers fairly and lawfully.

She has power to launch investigations into suspected breaches of the code, including those arising from confidential complaints from any source. If she finds evidence of a breach, the adjudicator will be able to make recommendations against a supermarket, require them to publish details of their breach, or, in the most extreme cases, to impose fines.

She will also has the power to arbitrate disputes between large supermarkets and their direct suppliers.