Is there a Liver Fluke problem on your farm? 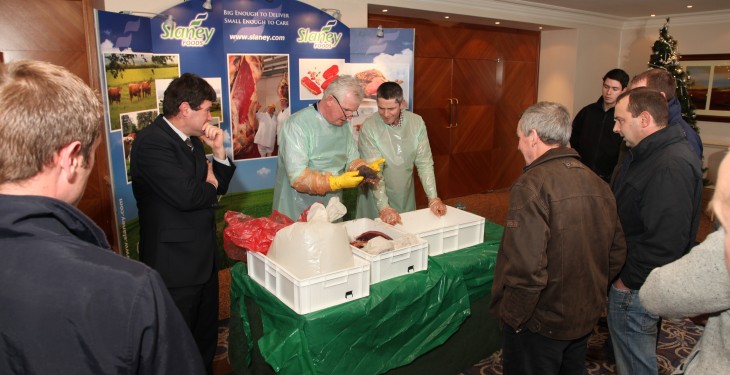 At a recent beef seminar on animal health issues organised by Slaney Foods a number of well-known professionals in the industry underlined the importance of controlling Liver Fluke.

Well-known Trim Co Meath Vet Frank O’Sullivan said: “Farmers need to know if their cattle have a Fluke problem. Apart from losing animals it’s just going to put a stop on your production.  Farmers need to manage the Fluke issue.

“Traditionally we use to say ‘Fence off wet areas and you’ll be fine for Fluke and we said it wasn’t a major issue on dry land’. That is not the case anymore.”

Reiterating the point at the same event Steven Conroy of the Irish Cattle Breeding Federation (ICBF) outlined that the Liver Fluke’s impact has even been seen in the ICBF’s work at its research centre in Tully in Kildare.

He showed results from a recent batch of 46 bulls slaughtered; 38 of the batch came back clear for health issues and eight were found to have chronic or damaged Liver Fluke. Conroy noted there could be other elements at play and this is only raw data.

“However the figures from these animals showed that their performance during their time at Tully was much lower that the non-affected animals. They had lower daily live weight gain, lower feed conversion efficiency and poorer kill out,” he said.

With this in mind and winter been an important time for farmers to get a handle on the problem, the Animal Health Ireland (AHI) has issued guidelines for farmers to help control of Liver Fluke.

Firstly it outlines that it is important farmers identify if they have a problem or not. According to the AHI, animals may show a variety of obvious signs such as oedema (dropsy) under the jaw (bottle jaw), anaemia, poor coat condition and lack of appetite. Liver fluke infestation can cause decreased fertility and wool production.

However, it notes the animal with weight loss and bottle jaw represents the ‘tip of the iceberg’. It says detection of Subclinical infection with its adverse effect on growth rate, milk yield and fertility requires diagnostic tests such as blood tests (elevated globulins, low albumins, elevated GGT) and assessment of faecal egg counts.

The AHI stresses diagnostic data relating to liver condemnation collected at abattoirs, which has begun recently in Slaney Foods, and is set to be rolled out nationwide is invaluable.

Also, bulk milk testing may be used on the dairy side to confirm that infection is present in dairy herds, but it says this method should be backed up by faecal egg counting prior to starting of a dosing programme.

The AHI says in Ireland, Liver Fluke infection can be a problem all year round. However, most infections occur during the winter, as a result of infections acquired in the autumn from snails that build up over the summer on pastures.

It cites that occasionally, snails become infected in the autumn and may hibernate over winter. They will then shed infection onto the pasture the following spring thus infesting animals early in spring time. Most herds in Ireland show evidence of infection, with prevalence greatest in the West.

AHI recommendations for control
• Improve drainage and fence-off wet areas with poor drainage, where possible
• Reasonable measures should be taken to prevent poaching and avoid grazing “flukey areas” particularly when metacercariae are likely to be present
• Dose bought-in animals with an appropriate flukicide before introducing to pastures. All bought-in animals should be quarantined for at least four weeks after arriving on farm
• A strategic dose, in early – mid summer, designed to reduce the number of snails becoming infected, is also recommended
• Fluke burdens can be monitored by using a combination of faecal egg counts, bulk milk ELISA and data relating to liver condemnations from the factory. Discuss these results with your vet to ensure your control strategy is effective and appropriate
• Dose animals, where possible, at housing, and if required, again four to six weeks after housing – refer to the AHI leaflet ‘Parasite Control at Housing’ for more information on treatment at this time.
• Treatment of dairy cattle is a particular problem. Dosing with an authorised product during the dry period should be considered.
• Heed the annual Department of Agriculture Liver Fluke forecast, issued in autumn each year http://www.agriculture.gov.ie