IFA takes to the streets 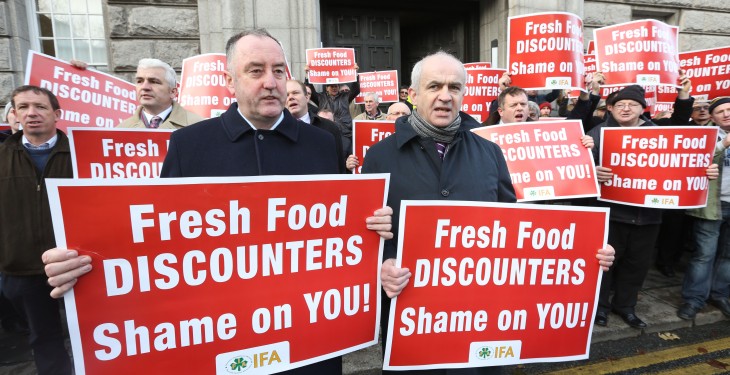 IFA members protested outside the offices of the Department of Jobs, Enterprise and Innovation this morning, demanding that Minister Richard Bruton introduces effective legislation to stop food retailers selling fresh produce at prices below the price of production. They then moved on to Dunnes Stores in Stephen’s Green. Later this afternoon, they will picket outside Lidl and Aldi stores in Ranelagh.

IFA President John Bryan has accused the Enterprise Minister Richard Bruton of dithering on regulation, while retailers abuse their dominant position and decimate jobs and small businesses as they vie for footfall with unsustainable prices for fresh food.

He said fresh food giveaway discounts are making a mockery of the hard work of vegetable and potato growers and the likes of Lidl and Dunne’s bosses advertising these giveaways in the national papers should be ashamed of themselves.

Addressing the protest, held outside the Department of Jobs, Enterprise and Innovation, John Bryan said robust legislation backed up by an effective and independent Ombudsman must address the below-cost selling of fresh food, whether it be fresh produce, meats for dairy products.

“The decisions of multiples such as Dunnes and Lidl set in train a sequence of events that has undermined the livelihoods of hundreds of vegetable and potato growers and small, family-run fruit and veg shops around the country. It is also very disappointing that other retailers felt the need to match these ludicrous prices.”

IFA’s Eddie Downey questioned why the German discounters are not giving away dry, non-perishable goods that they enthusiastically import, and make massive margins on.

He said it would be very naïve to think that retailers were footing the bill for this ‘promotion’ “Have no doubt, the same retailers will make back this reduction many times over, either by upping the price on other lines or by demanding a contribution from others in the food supply chain. Either way, they will not take a hit on their profits,” he said.

He said it is unforgivable that at this critical time for growers, and when consumers are willing to pay a realistic price for Irish produce, that a price war between the retailers should denigrate the value and work of a sector of Irish farming that is already under pressure due to rising costs and downward pressure on prices.

AgriLand has asked the Department of Jobs if Minister Bruton intends appointing a ‘Supermarket Tsar’, which would mirror the steps taken in the UK to investigate the selling practises of retailers. A response is forthcoming form the Department on this matter.