A Waterford farmer’s son who plans to cycle home from Sydney with his friend, across 28 countries and three continents, to fundraise for children’s hospital charities, hopes to pick up some farming ideas along the way.

Paddy Flynn from Knockalavalla, Carrick-on-Suir, and his friend Daithi Harrison from Tipperary, will cycle from Sydney to Dublin and run an ultra-marathon in all 28 countries to raise vital funds for Medical Research Foundation Crumlin and the Sydney Children’s Hospital Foundation. Their trip will commence on August 4.

“The idea about fundraising for the hospitals came about from working outside the children’s hospital here in Sydney on a construction project for the last two years,” Paddy told AgriLand.

It was as a result of seeing the kids rushed in by ambulance, cars jamming on brakes and parents running across the road with their kids in their arms and even one night a young couple walking out of the hospital, roaring crying and holding each other up.

“It made an impact and we knew the challenge we are about to set out on would be one people would support. We picked the hospital in Dublin also as we are both moving home for good and want to give back to the future generations in Australia for what Australia has given us and for Ireland as it is our home.

“At the beginning I don’t think our families took much notice but as time went on and they realised we were really going to do it, the excitement grew and they are all on board now and can’t wait for us to start,” said Paddy. His parents, Michael and Mary, have 110ac and are currently milking 64 cows.

“Our trip brings joy to people hearing about it and we’ve realised what we call the ripple effect – how things we are doing are inspiring others. We get people asking us advice on running their first race and even people telling us we inspired them to go for a hike or a run. That is our message, to inspire the adventure within, even if it is just a cycle to the shop or a simple walk up the road,” Paddy said.

Their epic journey spanning three continents will take about 14 to 15 months. “We plan to be home some time around October 2020,” said Paddy.

I am really looking forward to coming home to the farm. We have some ideas up our sleeves. The farm has a lot of potential but who knows what we see on the road over the three continents and what new ideas may be born. One thing for sure is when this adventure is over, another awaits.

“Australia has been unbelievable. I came here in 2010 for a year. It is now 2019 and it has been a fast nine years but a very enjoyable one. My intention was always to move back and farm and I feel the time to do that is now,” Paddy said.

Daithi landed in Australia last October with one thing in mind: To train and prepare for the cycle home.

“We have been planning and preparing since then. Now the time to do what we set out to do is here and we cannot wait to get out there and overcome any adversity and challenge head on,” said Paddy. 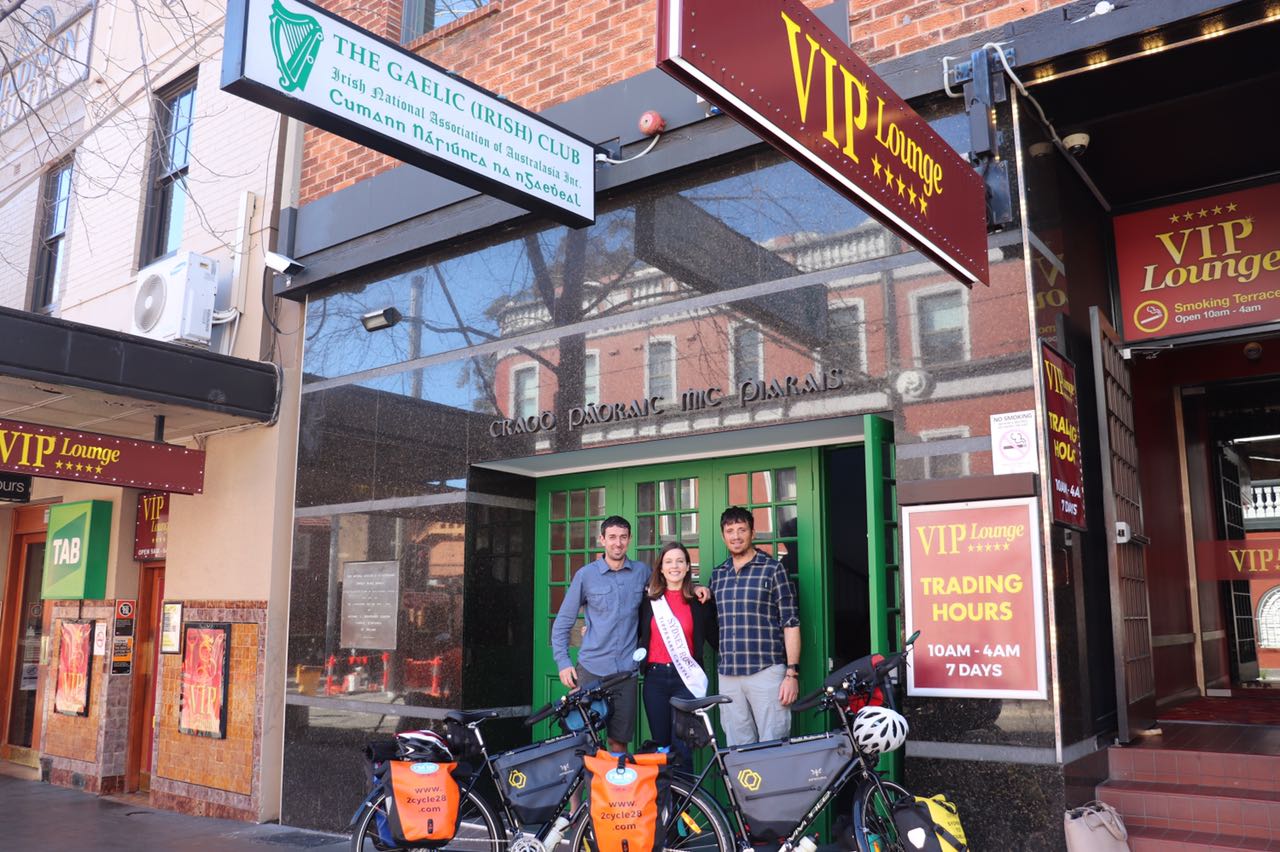 Paddy and Daithi with the Sydney Rose of Tralee, Rebecca Mazza, outside the Gaelic Club in Sydney. Her great grandfather James Daly hailed from Kanturk, Co. Cork. The 24-year-old spent several months working in a school in Waterford in 2013 and plans to return to Ireland shortly. She attended Paddy and Daithi’s fundraising event on July 20