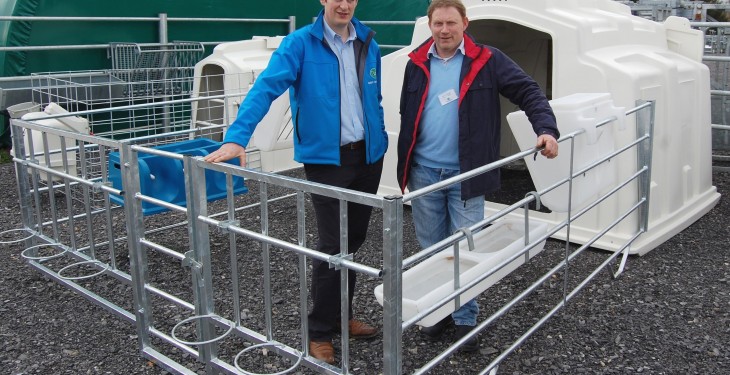 Recent trails have confirmed that the use of hutches can bring calf mortality rates down to 2%, or possibly lower, under the widest range farm conditions.

Speaking to AgriLand during a recent UK and Ireland Dealer Day Teemore Engineering’s Nicky Johnston pointed out that the fundamental requirement for all calves is to ensure they get sufficient colostrum during the first hours of life.

“But this is only the starting point. It takes a number of weeks for a calf’s immune system to fully develop, during which time it can become predisposed to a number of factors which can lead to the onset of disease and, subsequently, death.

“Young calves need plenty of fresh air, a draught free environment, a regulated temperature, proper feeding, a dry bed and separation from other calves that have picked up disease.

“Increasingly, dairy farmers now recognise that calf hutches tick all of these boxes. In our own case, we stock the Agri-Plastics’range. Manufactured in the United States, they come in single and group calf rearing options.

“We opted for the Agri-Plastics’ range because it is the ‘gold standard’, in terms of what’s on the market at the present time. For example, the quality of the plastic is such that the hutches block out the sun’s rays, thereby ensuring that calves are not subject to wide variations in temperature. They are also extremely robust, therefore guaranteeing a long, usable life.”

Referring specifically to the rearing practises followed on Irish farms Nicky Johnston pointed out that hutches can take the pressure off traditional calf houses, particularly at those times when the presence of large number of calves within the one unit can lead to significant disease build ups.

“I know that a number of our customers put the hutches onto the concrete floor of their silos at this time of the year. They can be easily put in place and managed accordingly. What’s more, they can be easily washed down between groups of calves.

“Hutches can be placed anywhere on or around a farmyard. They offer dairy farmers a totally convenient option when it comes to calf rearing.”