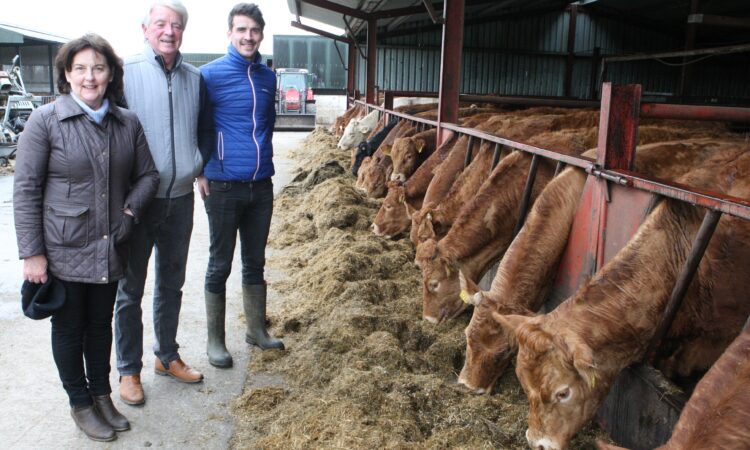 Vaccinating calves with Bovilis Bovipast RSP to reduce pneumonia is a critical component of the herd management programme for the Dalton family, who run suckler herds at Ballymacwilliam, Edenderry, Co. Offaly and at Luggacurren, Stradbally, Co. Laois.

“Since we started vaccinating with Bovipast RSP six years ago, the health and performance of our animals has dramatically improved,” said Pat Dalton, who runs the enterprises with his wife Ann and son Richie, who is also a secondary school teacher in Tullamore.

Their daughters Karen and Emma, who are also teachers and live near the family home at Ballymacwilliam, also provide valuable assistance at peak labour periods, making this a real family-run operation.

They have a total of 85 autumn and spring-calving cows, split into two herds. The herd on the home farm at Ballymacwilliam is primarily pedigree Limousin while the second herd, on the farm once run by Ann’s parents and grandparents at Luggacurren, Stradbally, is commercial.

“Before we started vaccinating with Bovipast RSP, we had a lot of problems with pneumonia, particularly at weaning and housing. While we didn’t lose many, animals that were affected suffered from poor thrive.

“We had big veterinary and antibiotic costs and even then some animals never fully recovered,” said Richie.

The first year they used Bovipast RSP, they gave just one shot of the vaccine which they quickly realised was a big mistake. While there was an overall improvement, there were still clinical cases of pneumonia.

For the past five years, all calves get a primary shot of Bovilis Bovipast RSP at about three weeks-of-age, followed by a booster shot four weeks later.

“There is a huge improvement in the health of our calves. When we do get the occasional animal with a touch of pneumonia, it responds much better to treatment. Vaccination has given us peace of mind, especially at stress periods such as weaning and housing,” added Richie.

Bovilis Bovipast RSP contains IRP technology and provides broad protection against bacterial pneumonia (caused by the bacteria Mannheimia (Pasteurella) haemolytica A1 and A6) as well as the two main viruses, BRS-virus (Bovine Respiratory Syncytial virus) and PI-3 virus (Parainfluenza 3 virus). It is given under the skin.

IBR (Infectious Bovine Rhinotracheitis) is another disease that gets top priority from the Daltons. Calves are given an intranasal shot of Bovilis IBR Marker Live, up the nose on the same day as they get the first shot of Bovipast RSP.

A highly infectious disease, almost three-quarters of all suckler and dairy herds are known to be positive to the IBR virus.

The Daltons have a high reputation as Limousin pedigree breeders. There is strong demand for their stock, all of which are sold directly off the farm to regular customers. They don’t attend shows and sales and there is no need to advertise their animals.

Progeny from their commercial suckler herd are reared on the farm and sold at 14-15 months when they weigh 500kg or higher.

Pedigree cows are bred to the top AI Limousin bulls. AI is also used on commercial cows indoors while two stock Limousin bulls are used to breed cows at grass.

They also buy around 20 Hereford or Angus cross dairy calves every year. They come mainly from the north Kerry region.

They are fed on milk replacer and are finished on the farm at 20-24 months. They also get the Bovilis Bovipast RSP and Bovilis IBR Marker Live vaccination programmes after arriving on the farm.

The Daltons work closely with their veterinary practitioners Alan Gormley and James Coffey in ensuring that their herd health programme is fit for purpose.

Protecting calves against clostridial diseases is another key feature. All calves are vaccinated with Tribovax T when they go to grass and get a booster shot four to six weeks later when they come back in for a worm dose.

Tribovax T protects against some of the main clostridial diseases, especially blackleg which is an ever-present threat on the majority of farms.

Annual vaccination of all breeding stock against BVD and Leptospirosis are other vital components of the animal health programme on this highly efficient, high-performing beef enterprise.