How this part-time beef farmer plans €1,800/ha of output to drive profit 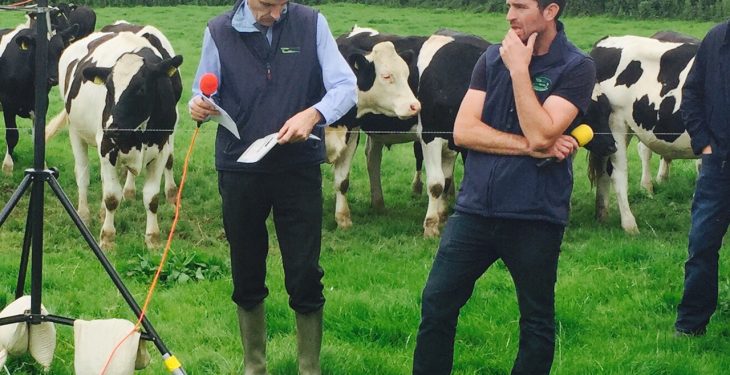 Selling more kilos of beef per hectare of land is seen by part-time farmer Conor Greene as the best way to drive profitability on his farm.

He hosted a farm walk in recent days and while noting the increased workload, Greene said he is willing to put the time into it to get the gains from the system.

“When you’re building up stock you are taking long days, but with a good paddock system it is manageable,” he said.

Conor returned home from Australia in 2012 to take over the family farm. The farm was traditionally fattening approximately 50 Friesian steers at 30 months of age.

Prior to joining the Teagasc Green Acres Programme, Conor had increased the number of animals reared and finished to 70.

All calves were purchased locally from a dairy farmer in the February to April period, these calves were predominantly Friesian bull calves and the last 20 were generally Hereford bull calves. 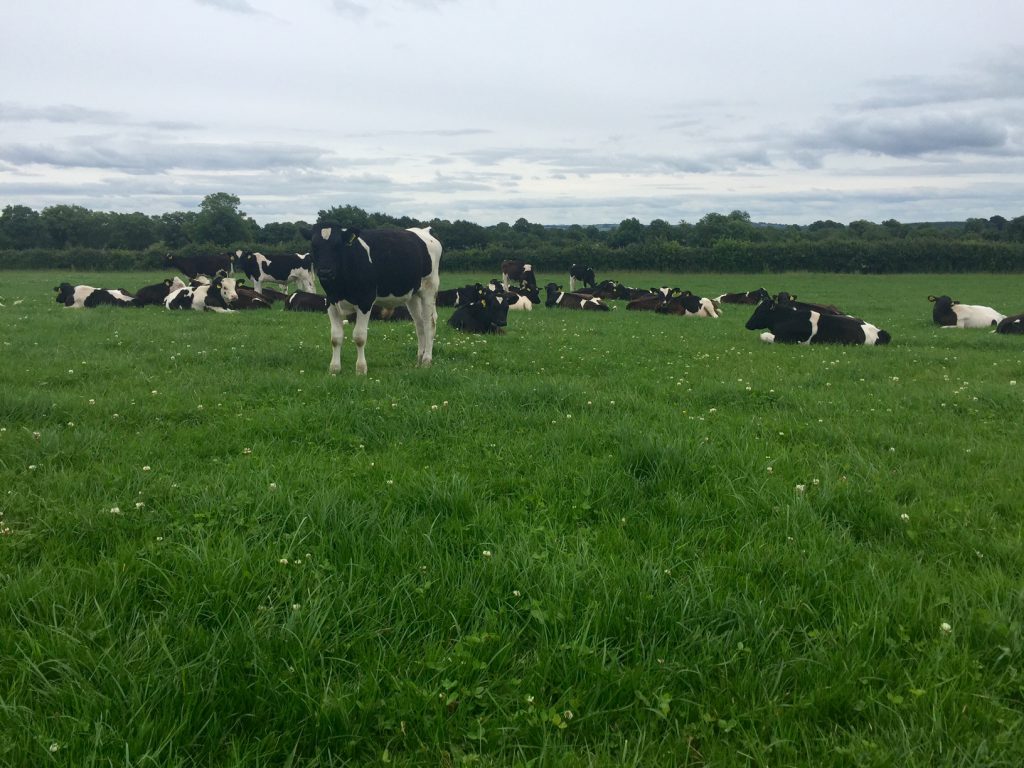 Calves are reared on milk replacer plus concentrate and straw for the first ten weeks and then go to grass for their first grazing season.

As Conor is working full time he decided to purchase an automatic calf feeder in 2013 to reduce the amount of workload during the calf rearing phase. 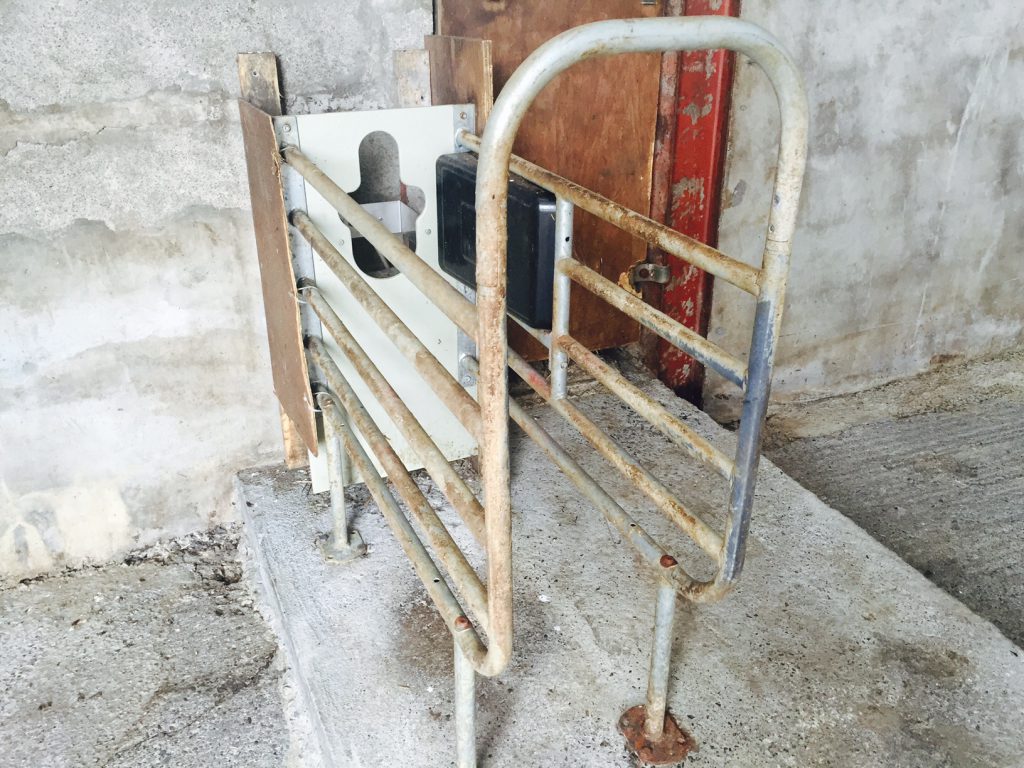 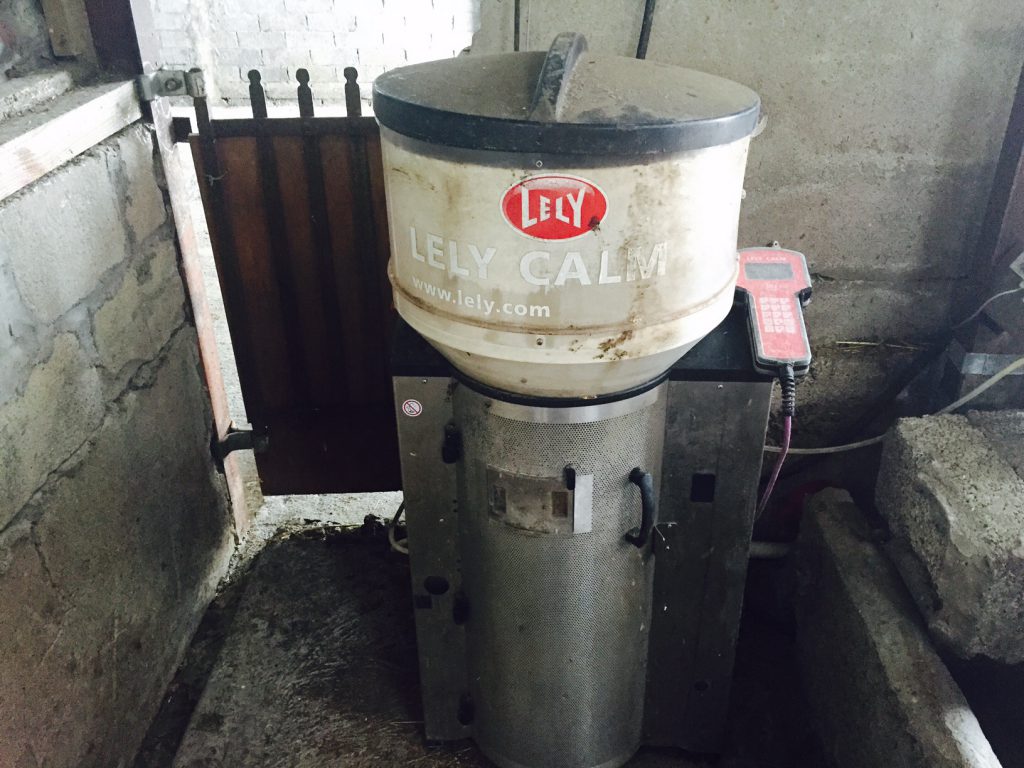 The steers are then housed in slatted sheds and fed silage supplemented with concentrates depending on silage quality.

Following the second year at grass the steers are housed for a second winter and supplemented with 1-2kg of concentrates.

They are then returned to grass for a third grazing season and finished off grass in the august to September period.

To drive output on the farm and to try and sell more kilos of beef per hectare Conor has increased his stocking rate.

This will be done by buying an extra batch of 40 calves and rearing them on the automatic feeder in the autumn/early spring. 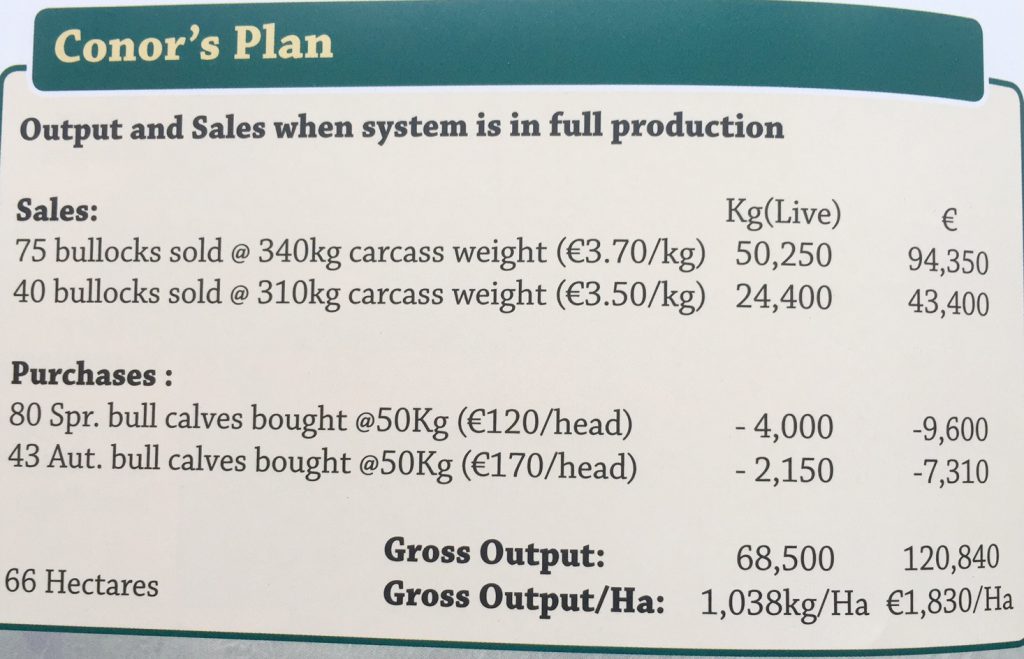 These animals can be fattened and slaughtered of grass as two-year-olds to save the need of housing them an extra winter. By carrying more stock Greene hopes to increase the output of the farm to €1,800/ha.

A total of 120 calves will be reared each year with 80 born in the spring, the strongest of these 80 will  be slaughtered out of the shed at two-year-olds with the rest returning to grass for a third season and finished in the June to July period.

A grassland plan has been put in place to make better use of grazed grass through the introduction of a paddock system, getting cattle out to earlier and also reseeding. The farm is in one block with 9 ha rented 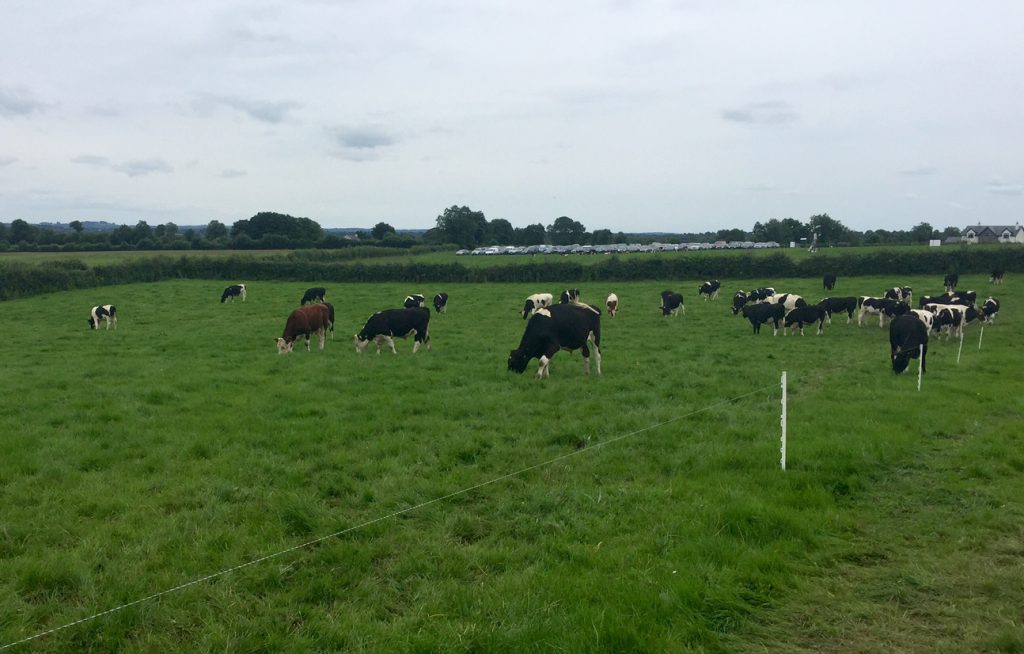 By using paddocks Greene can carry more stock and he can also get them to do higher live weight gain because grass is presented to the cattle in an optimum way.

He has also invested substantially in soil fertility and reseeding since joining the programme.

An animal health plan is also seen a vital for the farm, with Conor following a strict vaccination and dosing regime.

“We have always vaccinated for clostridial diseases and the last two years we vaccinated for viral pneumonia. Next year we are going to increase that to bacterial, viral and IBR vaccination,” Greene said.

He said the calves at grass got two white drench doses. One three weeks post turnout and one three weeks later followed later on by a treatment with Ivermectin. Later in the summer, faecal samples will be used to access the disease burden.

Figures from Greene’s profit monitor show a strong performance since joining the programme in 2014. Greene has substantially grown the output of the farm from 584kg/ha in 2014 to 772kg/ha projected for 2016.

This did come at a price in 2015 with variable costs increasing €493/ha in 2014 to €792/ha the following year. This was driven by spend on soil fertility issues and the costs of carrying more stock.

Greene projects that his farm will achieve a gross margin of €871/ha in 2016. 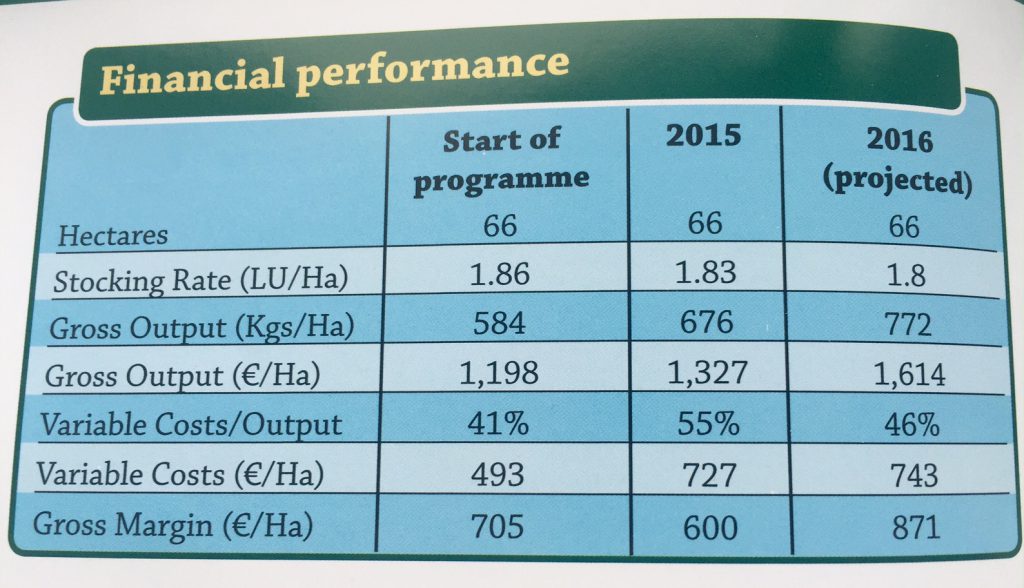 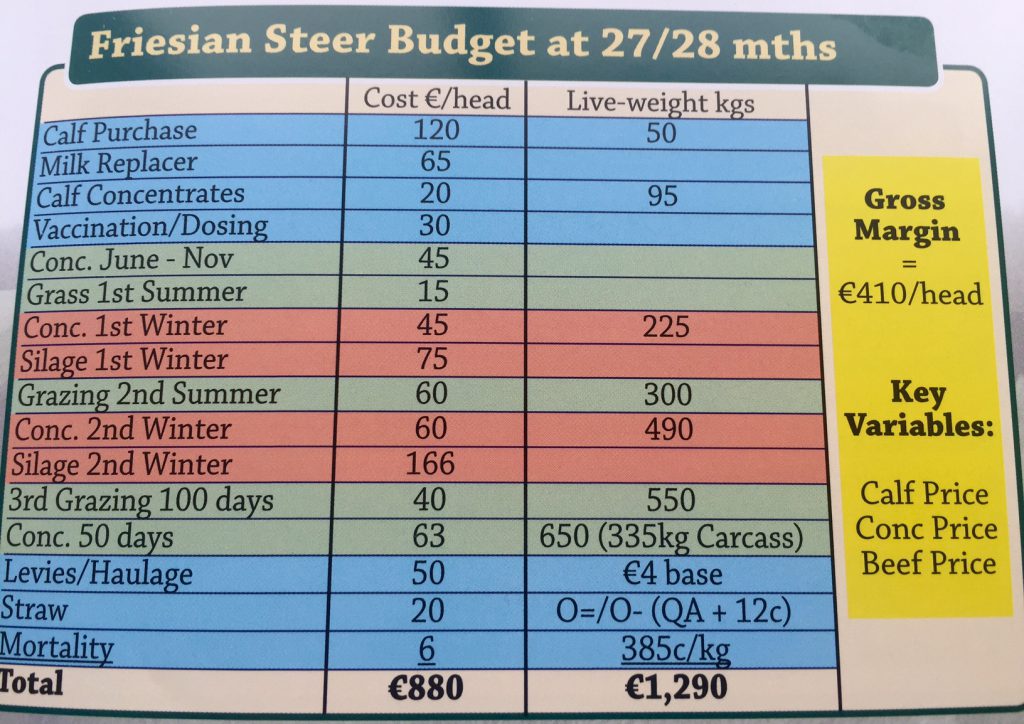