The number of farmers applying to Farm Assist has fallen since 2012, new figures from the Department of Social Protection show.

Total expenditure under the Farm Assist Scheme between 2012 and 2015 stood at €389.4m, the Minister for Social Protection, Leo Varadker, has said.

However, the Minister said that the breakdown of the monies paid to recipients is not collated on a county basis by his Department.

The table below shows the number of recipients of Farm Assist per county between 2012 and 2015.

Some 11,162 were in receipt of the payments in 2012 and this dropped to 8,790 in 2015, the figures show. Donegal, Mayo and Galway were the counties which had the highest numbers of applicants over the course of the four years. 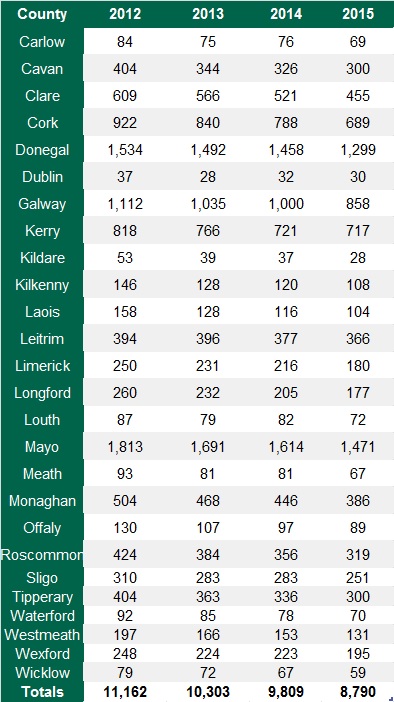 The latest figures released by the Department of Social Protection show that over 8,000 farmers were in receipt of Farm Assist payments during March of this year.

Farmers in Donegal and Mayo were the main recipients of this payment, with 1,309 and 1,259 farmers receiving support from the Department of Social Protection.

Meanwhile, Kildare, Wicklow and Dublin had the lowest number of recipients, with a combined total of just over 100 farmers.

The Farm Assist scheme was introduced in 1999 to replace ‘Smallholders Unemployment Assistance’ for low income farmers, without the requirement to be available for and genuinely seeking work.

Meanwhile, responding to a parliamentary question earlier this month, Minister Varadker said that any forthcoming changes to the Farm Assist Scheme will not be implemented until next year at the earliest.

The programme for Government contains a commitment to undertake a review of the farm assist scheme, recognising the challenges facing farmers on low incomes.

While the Minister confirmed that the review has commenced he said its recommendations will be considered in the context of the budget for 2017, subject to the overall budgetary context.

The farm assist scheme provides income support for farmers on low incomes and is similar to jobseeker’s allowance.