A Laois farmer is among those who ‘pooled’ their resources to spearhead the reopening of an outdoor swimming pool to revitalise their rural community.

Beef farmer Eamon Kennedy, who also has some forestry, and his wife, Liz, were among the locals who put in a mammoth effort to get their outdoor pool reopened as part of the Laois Local Economic and Community Plan.

“The outdoor swimming pool was built by the Salesians who ran a boarding school in the 1940s. It was a 45m pool originally and is now a 30m adult pool and 10m toddler pool. It was opened up under various guises over the years,” Eamon said.

“The pool has been left unused for the last four to five years. This latest initiative was started after Ballinakill Community Development Committee was set up,” he commented.

“The pool was in the ownership of the parish and the parish committee allowed us to take it over for redevelopment.

A huge amount of work has gone into the redevelopment of the pool, particularly over the last three months. It has been cleaned and repainted, with the toilets refurbished also.

With locals having pooled their resources, the pool reopened in sunshine last Friday night with a barbeque, much to the delight of the local community and visitors.

“It’s a huge facility for Ballinakill and the surrounding areas. People have come from all over, including people who had used the facility many years ago. Having the pool open brings people into Ballinakill, and they spend their money in the local shops. The pool has been very busy and is a tourist attraction in south Laois,” Eamon said.

The reopening of the pool is a real shot in the arm for this rural community which pooled its resources, he said. “Most people living in the area are working in Dublin, Kilkenny or Portlaoise and we wanted to create a facility in the village.

Everyone who worked on the project gave their time and equipment free of charge and there is a huge sense of pride about the redeveloped pool. It is a voluntary effort from the whole community.

“The committee is very enthusiastic about keeping the pool going. There is a plan in place to focus on winter sports. We hope to get kayaking started. The pool opening is just the start of the positive news. We also hope to get a playground on the site,” Eamon said.

Caragh Burns-Sharma, PRO, said that Ballinakill had been described by agencies as one of a small number of communities in Laois with poor community structures and a history of low engagement with grant and other community supports.

“A consultant was engaged through Leader to formulate a community development plan. He held open meetings and gathered enough information to create a five-year plan.

“Top of the list was reopening the outdoor pool, building a playground and enhancing employment opportunities,” she said. 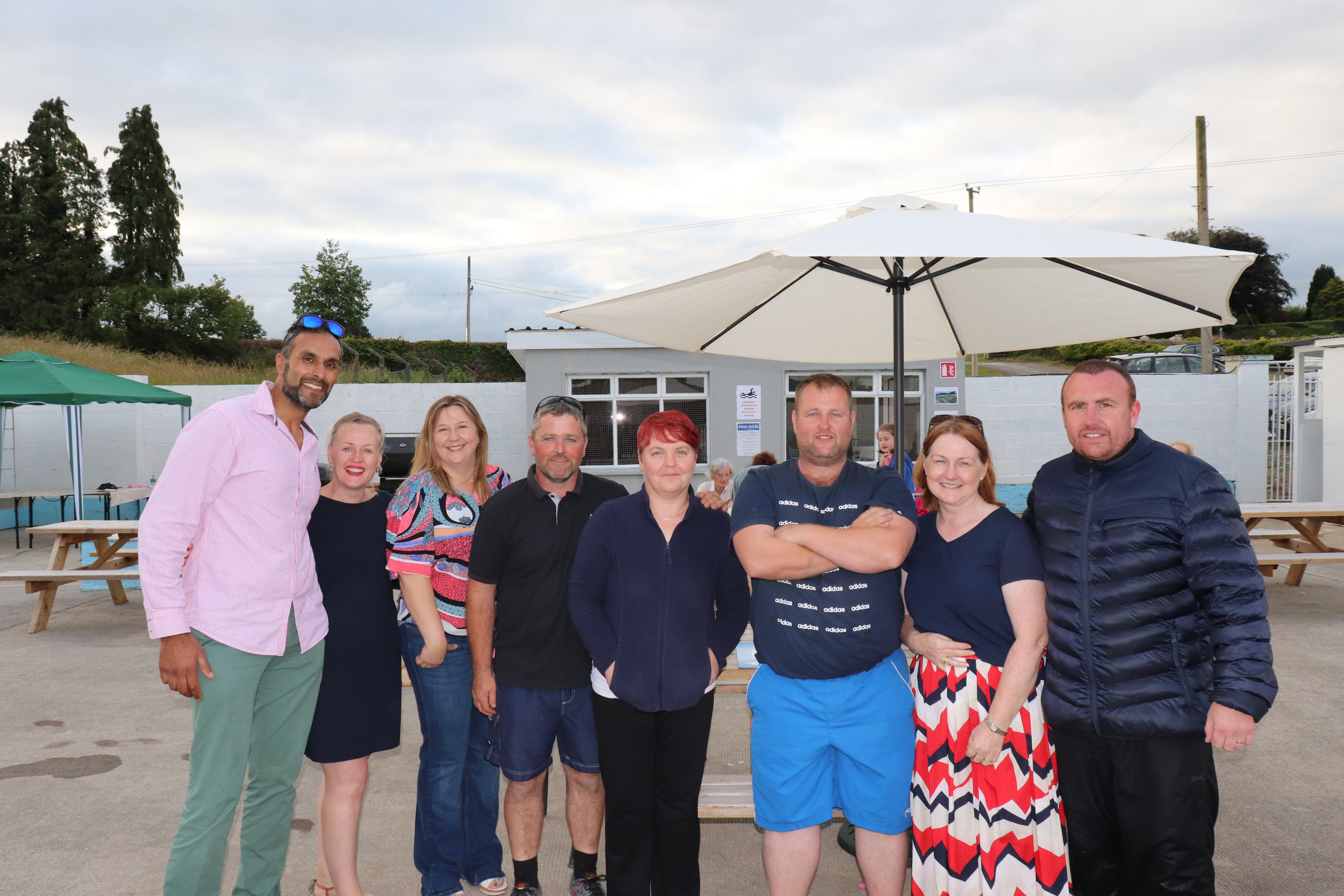 Ballinakill Community Development Committee was formed as a result of this process. “The post office closed in 2018; the knock-on effect on the turnover of local shops and even the parish lotto was devastating.”

Yet there were positive aspects, Caragh said. “Ballinakill is a beautiful, historical village with amazing looped walks that go right into and around the lakes and woodlands of Masslough and the Heywood estate and to the exquisite Lutyens-designed Heywood Garden.

“With the support of Leader, Ballinakill Community Development Committee is developing the historical looped walks. 15,000 people walk the gardens every year and we aim to use this as an opportunity to enhance tourism in the village,” said Caragh.

“We’re working with the Office of Public Works, the owners of Heywood gardens, to celebrate the 150th anniversary of Sir Edwin Lutyens, the ‘starchitect’ who designed them. The Twin Trees Heywood art and culture festival will take place in August.

Artists from as far afield as the US will spend three days enjoying tutored landscape painting in Heywood Gardens, the lakes and woodlands and in the village.

“There isn’t any accommodation available in the village, so some locals in Ballinakill and Abbeyleix will be hosting paying guests for the first time. There are also talks on Lutyens and displays by floral artists in the village, yoga in the garden and a free musical evening in Heywood Garden,” Caragh said.

“We hope that the playground will be built in spring 2020 and that we will take a greatly increased advantage of the tourism opportunity presented by the hidden gem that is Ballinakill.”