How many farmers in your county are awaiting GLAS and AEOS payments?

Some 5,131 farmers are awaiting payments from the first tranche of the Green Low-Carbon Agri-Environment Scheme (GLAS 1), figures released by the Minister for Agriculture, Michael Creed, show.

A further 2,429 farmers are still waiting on payments from tranche two of the scheme, the figures, which were released to Fianna Fail’s Charlie McConalogue, show.

Last week a further 750 farmers received their GLAS payment from the Department.

Minister Creed said that his Department is continuing to review outstanding cases and will continue to process payment runs on at a least a weekly basis.

Speaking in Seanad Eireann last week, the Minister said that he is “acutely conscious” of the cashflow hardship farmers are experiencing at the moment and that he is also conscious of the Farmers Charter of Rights also.

“Every effort is being made to get them paid as quickly as possible. Every single application has to be eyeballed and issues with those applications currently being held up have to be resolved.

“It’s a logistical issue that needs time to be resolved.” 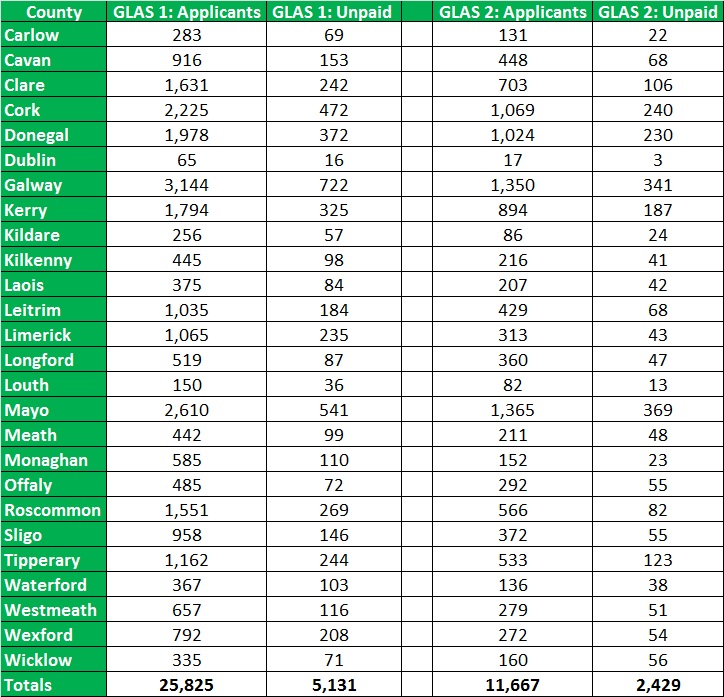 Meanwhile, the Minister said that under the EU Regulations governing the the Agri-Environment Scheme (AEOS) and other area-based payment schemes, a comprehensive administrative check, including cross-checks with the Land Parcel Identification System must take place.

“As all AEOS II participants will be receiving their final payments under the scheme, re-checks on payments made for all scheme years must be completed before final payment can be processed.

“Officials are working through these files and payment will be made in all cases as soon as possible payments are being made to applicants who have passed the administrative checks on an ongoing basis.”

A county-by-county breakdown of how many farmers are awaiting payments under AEOS was provided by the Minister for Agriculture:

GLAS 3 approval letters to issue to over 12,000 farmers this week

'A significant acceleration of GLAS payments is needed'