An addiction to contracting and the silage season has drawn Irish man Niall Donohue to Australia and back in the space of a couple of months.

The Co. Galway native spent the past few seasons working with local contractors before taking the decision to travel to the other side of the world to see how it’s done in Australia.

After finishing his Leaving Certificate exams in 2016 the 19-year-old decided to fulfil one of his dreams and make the trip to Australia, an experience which delivered above and beyond his expectations.

I’ve always wanted to travel to Australia since I was young and last year I said I might as well go now before college, while I’m young and have the chance.

Donohue worked with Rural Harvesters briefly before getting a job with Monk and Sons Agri Contractors, in Warrnambool in southern Victoria.

Travelling out after the Irish contracting season came to an end in 2016, Donohue spent close to four months working in Australia before returning home in mid-January.

The Co. Galway man found himself primarily drawing silage and mowing, with the scale of work dwarfing the size of operations here in Ireland.

“I started off on a New Holland T7.270 drawing silage from the chopper and then moved onto a Fendt 824 with a set of Krone triple mowers.

At silage we usually aimed to be out in the field by around 6am, but this often varied depending on the job and the weather.

“Generally we finished around midnight but this often varied too depending on if we had a job finished, sometimes we had to work a few hours later to get the work done.

“The days are long but I know nothing better to be honest, silage is all I’ve known and worked at. So I’m used to the long hours and take no notice of them anymore,” he said. 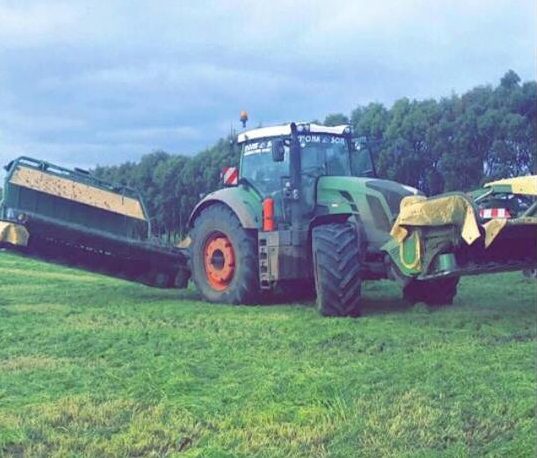 Working with a group of close to 20, 13 of which were Irish, Donohue often found himself working long hours to get work finished on time.

“Over here you get payed by the hour, unlike at home where it’s a daily rate at silage. So it’s worth staying working long hours when you know you’ll get rewarded for it when the pay cheque comes.

“I remember driving more or less non-stop for nearly 42 hours, with a few breaks, when we were pushed for time to get a job finished.

“The largest job we worked on was a pit of 800ac, which took close to a week to complete,” he said.

Donohue found himself working for a contractor who had a fleet of impressive machines, which included three 900 series Fendts, two 800 series Fendts, five Claas tractors and two John Deeres, as well as a few rented tractors.

Alongside these tractors he also ran a number of Lely Welger balers and silage wagons, a Claas Jaguar 890 self-propelled harvester, two tube wrappers and a number of trucks for drawing silage.

However, the scale of the work in Australia and the rough terrain takes it’s toll on the machines a lot faster there than they would in Ireland, Donohue said.

“The Krone mowers I had were brand new and falling apart. They had mowed 14,000ac, so they had their work done.

The mowers were in the same condition after one season as mowers here in Ireland would be after having four or five seasons done.

At times, working in a foreign country so far away from friends and family was tough, Donohue said.

“The weather and pay was good in Australia, but at times you would miss the craic at home, especially when you would be talking to friends and family at home.

I made friends for life out in Australia and I’ve seen more than any picture or video could show me. 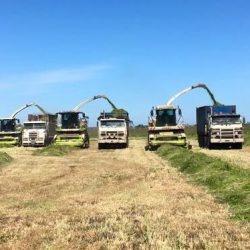 Donohue would encourage any young person thinking of travelling out to the likes of New Zealand or Australia to go for it, but warned them that the work would be tough and conditions would be challenging.

Temperatures were often up around 30 degrees and reaching as high as 40 degrees on some days, he said.

Having recently returned home, the young Co. Galway man has yet to decide on his plans for the future, but it will involve contracting in some form or another.

“It’s a disease really, you could never get away from it fully. I also have the option of studying Mechanical Engineering in GMIT.

“But there is a possibility that I will go out to Australia again to work for another season or two,” he said.

Video: Drone footage captures the scale of the Australian harvest

Meet a young photographer whose agri videos have been seen 1.6m times