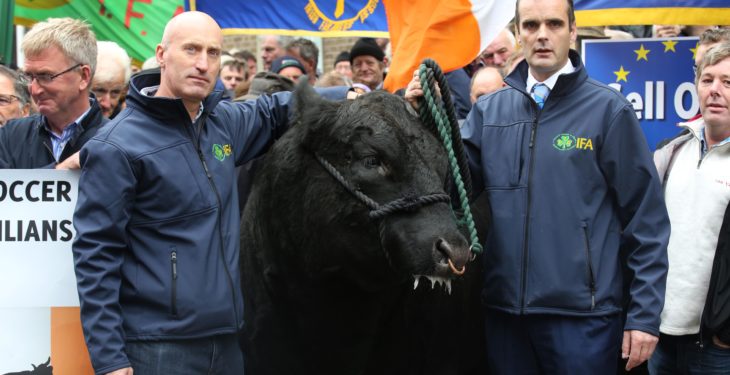 Senior officials, from the cabinet of European Commissioner for Agriculture and Rural Development Phil Hogan, have met with members of the Irish Farmers’ Association (IFA) to discuss details of the €100 million Brexit beef package.

The meeting took place in Brussels yesterday, Thursday, May 16, and was attended by the IFA’s national livestock chairman Angus Woods and the association’s Brussels director Liam MacHale.

Woods explained: “Commissioner Hogan is very clear. The money needs to be paid out immediately to the beef farmers.

The commission has provided the necessary flexibility, so the aid package can be finalised and payments made to farmers as soon as possible.

Woods acknowledged Commissioner Hogan and Minister Michael Creed, along with their officials in the EU Commission and the Department of Agriculture, for their work on this.

“When IFA presented our analysis to the Department of Agriculture, they understood and accepted that the case was properly researched and the figures were accurate.”

The €100 million Brexit beef package is made up of €50 million provided from the EU Commission’s emergency market support measures, with the Government expected to provide matching funding of another €50 million.

The IFA’s livestock leader said: “The Department of Agriculture has all the data in respect of the losses incurred.

The IFA has submitted the full details of the analysis and calculations in arriving at the €100 million loss package.

Concluding, Woods remarked: “Beef farmers have suffered savage price losses due to Brexit uncertainty and it is a welcome development that the EU Commission has recognised this and responded to the IFA proposal.”