Phil Hogan has been formally approved as the new European Commissioner for Trade this evening, Tuesday, October 1, by the European Parliament.

In a tweet, the commissioner said he was “honoured to be approved as EU Trade Commissioner by the trade coordinators of the European Parliament”.

“The EU’s leadership role in global trade has never been more important or faced as many challenges as it does today,” he added.

I therefore look forward to working very closely with MEPs and the European Council. I hope to justify the trust they have placed in me to deliver on our shared agenda.

In a Twitter thread, the new Commissioner for Trade quoted Commission President Ursula von der Leyen, who said “the EU’s trade policy allows us to build partnerships, protect our market from unfair practices and ensure our values and standards are protected”.

Hogan’s confirmation in his new role comes after he was questioned on his priorities for the job by members of the parliament yesterday.

Honoured to be approved as #EUTrade Commissioner by the @EP_Trade coordinators of the @Europarl_EN.

The EU’s leadership role in global trade has never been more important or faced as many challenges as it does today. (1)

During the session, he outlined what his key concerns would be in the position, which included specific reference to: reform for the World Trade Organisation (WTO); the much-publicised EU-Mercosur trade deal; and building EU-US and EU-China trading relationships. 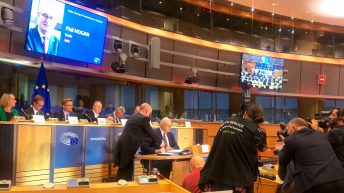