Here’s where rainfall was heaviest over the weekend

Donegal, Galway, Mayo and Sligo were hit with the worst of the rain.

There was accumulations of 40 to 60mm generally however, Met Eireann warned that 60 to 80mm of rain was promised on hills and mountains.

The yellow rainfall warning affected the midlands and parts of Munster and Leinster. 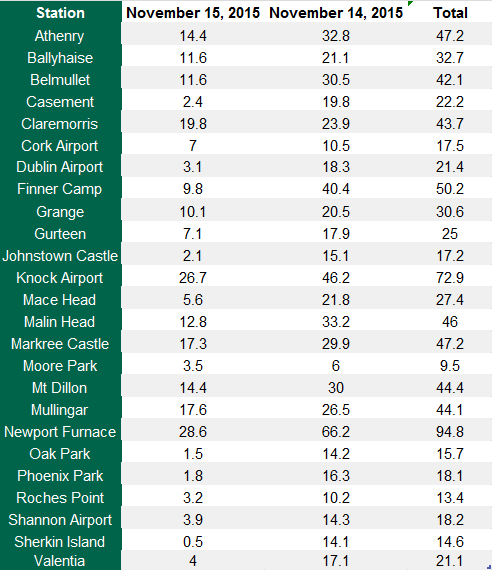 Looking at Met Eireann data for the weekend, the rainfall station at Newport Furnace in Co. Mayo recorded 94.8mm of rain between Saturday, November 14 and Sunday, November 15.

Advertisement
Staying in Mayo, Knock Airport had the next highest amount of rainfall, with 72.9mm over the weekend.

Finner Camp in Co. Donegal was the next place to be hit with higher than average rainfall. Some 50.2mm of rain fell over the two days.

Athenry in Co. Galway and Markree Castle in Co. Sligo both received 47.2mm of rain at the weekend.

The rain was particularly bad in the west, as Clonbur GAA club found out in Co. Galway. Walter Halloran took this photo on Sunday, November 15: 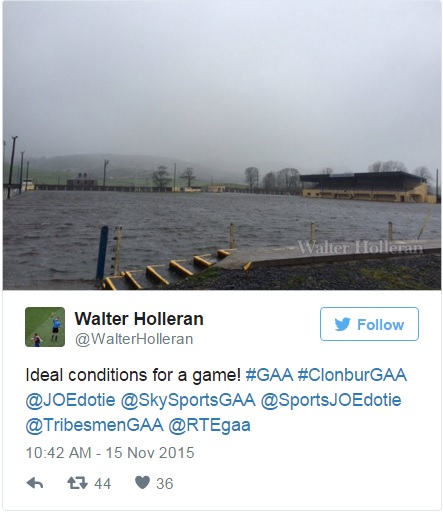 There was also higher than average rainfall levels seen in more eastern parts of the country.

Casement Aerodrome, near Baldonnel in Co. Dublin saw 22.2mm of rain over the weekend while Moore Park near Fermoy in Co. Cork received the lowest rainfall with just 9.5mm.

Roches Point in Co. Cork had the next lowest rainfall levels with 13.4mm of rain there over the weekend.