Has the BDGP delivered for suckler farmers?

The Beef Data and Genomics Programme (BDGP) is an agricultural scheme which was launched by the Department of Agriculture, Food and the Marine in May 2015.

The scheme, which will run until 2020, is designed to improve the genetic merit of suckler herds and reduce greenhouse gas (GHG) emissions from Irish beef cattle.

While the scheme has come in for some criticism from some farmers since its introduction, the Irish Cattle Breeding Federation’s (ICBF’s) Dr. Andrew Cromie explained the development of the programme over the years and how it has been beneficial to the Irish beef industry.

“We are the best in the world in terms of our ability to produce high-quality beef from an industry with very tight controls and scrutiny; all while doing it in a very carbon efficient way.

“There must be an opportunity to promote this into the future,” he added.

The programme – which Dr. Cromie acknowledged was challenged at its outset – saw suckler farmers receive approximately €90/cow after data was recorded and submitted to the ICBF.

Some 24,000 farms were involved amounting to 550,000 cows, while over 1.5 million animals were genotyped. An additional scheme – the Beef Environmental Efficiency Pilot (BEEP) – was rolled out this year, which revolves around cow and calf liveweight.

Commenting on the results witnessed so far from the BDGP, Dr. Cromie said:

“The first big positive outcome that we can see is genetic gain for our industry. The BDGP was introduced in 2015 and we can see – in 2017 – a spike up in the average genetic merit of the Replacement Index in the suckler herd.

“We are now moving at the same rate of gain in our suckler herd as has been achieved in the dairy herd. The only difference in genetic gain is that they are sitting 12-13 years apart,” the ICBF director explained. 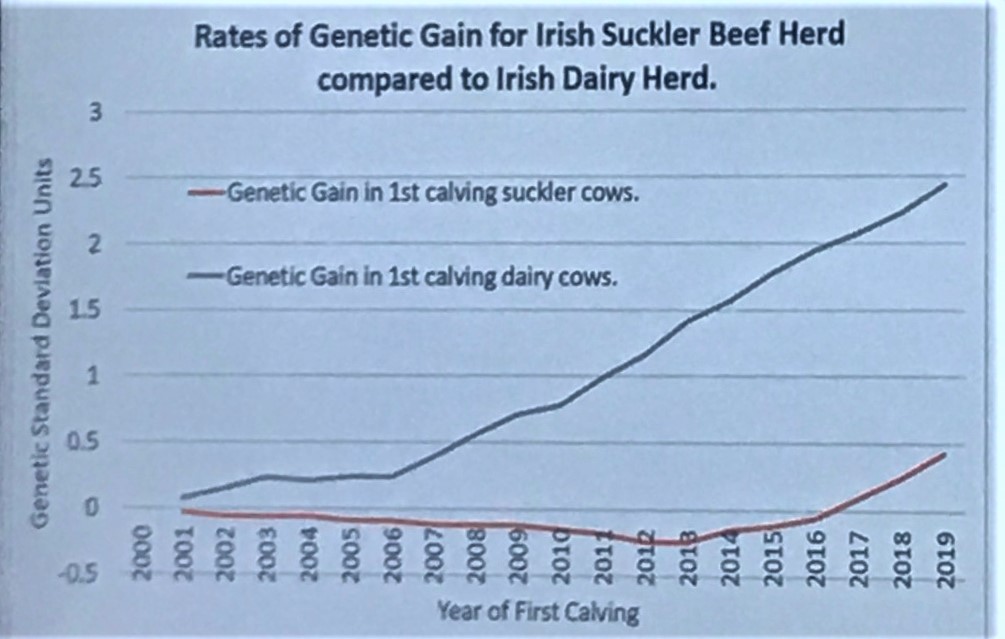 “It’s a really positive story and it tells us that our suckler herd, in terms of the type of replacements that are calving down year-on-year – and if we keep going with programmes such as the BDGP – the type of suckler cows we will get in the future will continue to improve approximately €5 gain/year – the equivalent of €300 million up to 2030 to the beef industry.

“What the BDGP was really looking to do was provide more confidence to suckler farmers around replacement females that were going to be brought in to the herd,” he highlighted.

“If we look at results that are coming from 5-star cows compared to the 3-star and 1-star cows, we can see an average difference in terms of Replacement Index of €114 compared to €23.

“5-star cows also produced a heavier calf in terms of weaning weight at 200 days, with a lighter cow with no loss in carcass weight, conformation or fat score.

“When you put the economic values onto these individual differences – in terms of these key profit traits – we can see that the cumulative of all these benefits in terms of profitability for the suckler farmers was €137/cow/year.

“That’s a significant amount in the context of our overall beef industry,” he added.

On the night, Dr. Cromie also highlighted three other areas that provide a “great opportunity” for the Irish beef industry. The first area was the direct measuring of methane from animals – which can be carried out at the ICBF performance centre at Tully.

“That’s a huge positive story that we can bring to the challenges that face suckler cows, as people see them as very carbon inefficient.

“This is clear evidence that – through the BDGP supported by data in Tully – there is huge opportunity to breed a low carbon suckler beef animal in the future.”

Dr. Cromie noted that reducing the average age at slaughter by just one month would equate to the same as 50,000 less suckler cows in the country in relation to the carbon footprint.

If we look at the difference between sucker-bred steers and Angus dairy-bred steers, the suckler-bred steer is more carbon efficient when you look at kg/carcass weight; this is a big positive story.

Dr. Cromie also highlighted that the continued genotyping of animals will provide more opportunities among both suckler-bred and dairy-bred animals.

Concluding his presentation, he said: “The BDGP and BEEP have delivered in terms of profitability and sustainability.

The rates of gain are now comparable with the Economic Breeding Index (EBI).

“And, the one for consumers is the direct measurement of methane and that higher Replacement Index cows produce less methane.

“Despite the many challenges that are there, we are in a uniquely strong position in Ireland to capitalise on the foundation that the BDGP and BEEP is providing,” he concluded.