The shortest bull in the world lives in Co. Antrim and has made it into the Guinness Book of Records.

The Guinness Book of Records has some amazing agriculture records and facts, including the world’s largest yield of milk – 216,891kg which was from a cow in Canada.

It says the the highest recorded world lifetime yield of milk is 216,891kg and was verified from the production certificate dated February 2012. The record-breaking cow, Smurf is a Holstein cow owned by La Ferme Gillette Inc. Dairy Farm in Embrun, Ontario, Canada.

Her milk production is all kept on record because she gets tested once a month by an official measuring system as used by farms internationally, the Guinness Book of Records shows. She was born in September 1996 and was the oldest cow on the farm at the time of her record-breaking achievement.

One animal that never saw a de-horner went on to be the owner of the largest horn circumference on a steer which measured 95.25cm (37.5 in).

The African watusi steer owned by Janice Wolf of Gassville, Arkansas, US and has died since the measurement was taken in 2003.

The largest sheep’s cheese weighed 534.7 kg (1,178.8 lb) and was prepared by Comitato Promotore Fiera Castel Di Lama (Italy) and presented at the 15th edition of the Farm Exhibition of Vallata del Tronto in Castel di Lama, Italy, on 29 May 2009.

Closer to home, Archie, a 29-month-old Dexter from Co. Antrim, is recognised as the Shortest Bull in the world. He measures just 76.2 cm (30 in) from the hoof to the withers, 15 inches shorter than other bulls of his breed (typically 45 in).

The height of the bull means that he’s dwarfed by the other animals at his farm, including even the dogs and goats.

Ryan Lavery brought Archie the bull at five months old and says that if it wasn’t for his small size, the fate of the bull would have been very different, he says.

“When we bought Archie, he was destined for beef. However, by Christmas time, he still hadn’t grown and because we had become so fond of him we decided to keep him. His size saved his life and now he’s going to live out the rest of his life as a pet.” 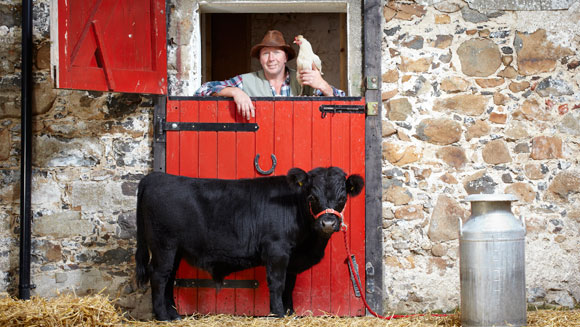