Growers urged to cut back their potato acreage this year 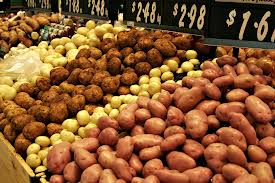 Potato growers should reduce their potato planting areas to some degree in 2015, given the poor prices that have been available over the past two seasons, according to Teagasc’s Dr Denis Griffin.

“Last year saw an oversupply of potatoes coming onto the market right across Europe, with prices falling accordingly,” he said.

“We continue to see a decline in potato consumption here in Ireland, so growers should err on the side of caution as they prepare for this year’s planting season. The reality is that potatoes remain a very expensive crop to grow, with costs before storage in the range €2,000/ac to €2,500/ac.

Griffin confirmed that planting of main crop potatoes should get underway in earnest over the coming days.

“April 1 is the traditional target planting date in this country, but soils in many areas are still quite wet, particularly a couple of inches or so below surface level,” he said.

“The preparation of a fine seedbed is critically important, where spuds are concerned.”

Griffin also believes that Irish potato growers should start to look seriously at how they can diversify their businesses.

“There is a growing demand for salad potatoes and, in this regard, Teagasc has just brought to market a new variety, called Imagine, which shows promise for the future. There is also significant potential to increase our seed potato acreage.

“There is also significant scope for Irish growers to produce potatoes for the chipping market. Almost all this requirement is met by imports from Europe at the present time. Price will, obviously, determine the viability of this option. There is also a requirement to establish a chip processing factory in this country.

“The fundamental bottom line is that growing potatoes as a commodity crop is no longer a feasible business option in this country. Growers must develop a value added mentality.”