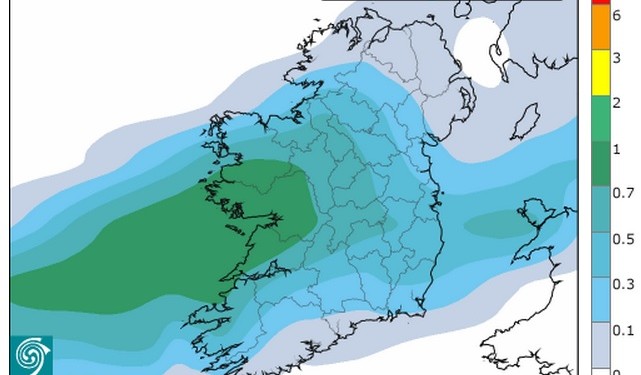 Met Eireann says rain spreading eastwards across the country tonight (Friday) will clear and it will become colder as the rain clears with lowest temperatures of 1 to 4 degrees.

Tomorrow, Saturday, will be much cooler and fresher than recently with highest temperatures of just 8 to 11 degrees and fresh west to southwest breezes, it says. The day will begin dry with sunny spells but scattered showers in the west will become widespread with heaviest falls of rain in Connacht and Ulster, it says.

Showers will die out on Saturday night and it will be mainly dry for a time, rain will move in from the southwest overnight and will affect many areas by Sunday morning, it says. There will be lowest temperatures of 1 to 5 degrees.

Looking to Sunday, Met Eireann says that it will be cool, mainly dull and wet with rain affecting all areas through the day and it may be heavy at times but it will gradually clear through the evening and early night.

On Sunday there will be highest temperatures of 8 to 12 degrees with light breezes and Sunday night will be cold with frost developing in places, especially over the northern half of the country, with temperatures between -1 and +5 degrees it says.

Currently Met Eireann says it will be mainly dry and mostly cloudy on Monday and there may be some light rain or drizzle in parts of the west and north. It will be a bit milder with highest temperatures of 12 to 15 degrees with moderate southerly breezes and Monday night will be frost free, it says.

Tuesday and Wednesday will be mainly dry and warm with sunny spells, light winds and temperatures reaching 18 or 19 degrees, it says. At the moment, Met Eireann says there will be a greater chance of rain on Thursday or Friday with showers pushing up from the south.