Why grass analysis proved valuable to one Tipperary farmer 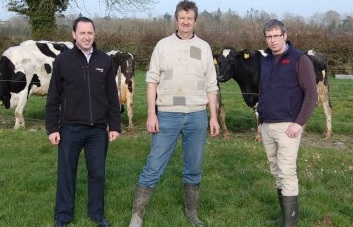 It was only on the back of a grass test, last autumn, that dairy farmer Noel Butler had any hint at all that his swards were slightly low in selenium.

Noel is currently milking 115 spring-calving cows near Fethard and last year, the herd averaged 1,370 gallons at 4.00% butterfat and 3.60% protein.

“I have upped the cow numbers from 75 to the current figure of 115 over recent years,” Noel said.

“For the most part, the farm is in one block. In theory, I would like to expand the scope of the business further: the problem is the difficulty is getting ground to rent in this area. The cows are 65% Holstein in terms of their breed make up. So there is significant potential to increase individual yields significantly.”

The tests were co-ordinated by Gain Feeds’ Business Manager Brian Mullally who said he would routinely propose the need for silage, grass and soil testing to clients.

“This approach allows dairy and livestock farmers to realise the extent to which mineral and other nutritional imbalances can impact on animal performance. In the case of selenium, problems can be best picked up courtesy of a grass or forage analysis.

“And it’s effectively remedied by the addition of an in-feed supplement called Sel-Plex which is manufactured by Alltech.”

According to Noel, another key driver for the business is to extend the number of days in which the cows are in milk.

“Last year I fed the cows well at the back end and this certainly helped improve the overall output of the herd.

“But milk from grazed grass will remain the key driver for the farm. In order to extend the number of days in milk from this type of system, the only option is to calve the cows down that bit earlier in the year and to make the calving period as compact as possible.

“And we are already started to do this. This year, all the replacement heifers calved down in January. The plan is to repeat this process in 2016.”

Almost three quarters of the Butler herd had calved down by mid March this year with the remainder of the cows scheduled to re-join the milking group by the beginning of April.

The fresh calvers were fed Gain Drive, 19% protein nuts at a rate of 5kg per head per day while indoors. This was changed to the 16% ration formulation post turnout.

Spring Breeding Management
“The cows will be switched to the Gain Spring Breeder nut prior to the commencement of the breeding season,” Brian Mullally said.

“The initial feeding rate will be 4kg per head per day. Gain Spring Breeder is a 14% protein, high energy ration, containing a significant proportion of rumen bypass starch, which has been derived from maize. It also contains all the trace elements the cows require in Bioplex form plus Sel-Plex.”

April 20 marks the start of the breeding season on the Butler farm. Noel uses AI for the first six weeks and then sweeps up with an Angus bull with the replacements starting a week earlier.

“I am very upbeat for the future of milk production, once quotas come to an end,” he said.

“On this farm there is scope to feed more meal to the higher yielding animals. This has the added benefit of putting that bit more condition on cows in the run up to drying off and the start of the next calving season.”