Despite lower milk prices, EU milk deliveries in 2015 are expected to be nearly 1% above 2014, according to the European Commission

However, the Commission data shows very different developments in the different Member States, with a few countries where milk collection increased strongly from the first day after quota expiry, while in other countries no such development is observed.

In the first quarter of 2015, the decrease in deliveries compared to 2014 was particularly noticeable in Cyprus, Ireland, Estonia, Belgium, Austria, the Netherlands, Latvia, Italy, Germany and Denmark.

Latest EU production figures for May shows Ireland way out in front in terms of production as the map below shows: 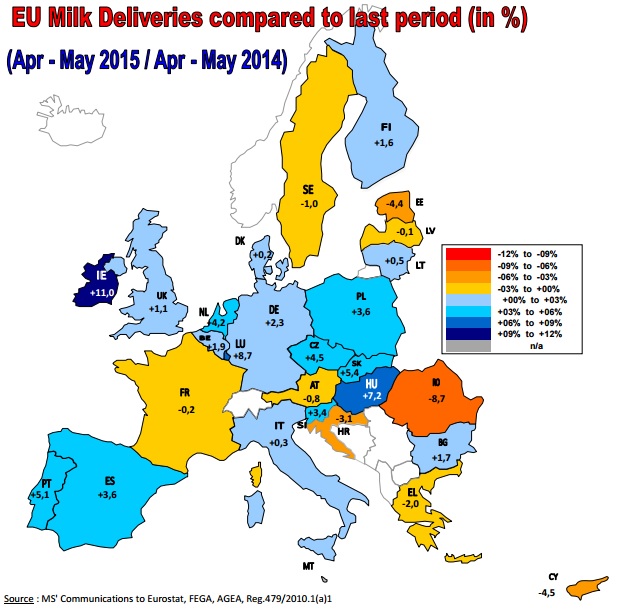 In other Member States like France, with deliveries well below quota, the decrease resulted more from adjustment to market and price developments. In the United Kingdom, a slowdown in milk deliveries was also noticeable.

By contrast, farmers in other Member States continued to substantially increase their deliveries despite low milk prices: Hungary, the Czech Republic, Slovakia, Slovenia and Portugal. Milk collection rose in Lithuania and Finland too, despite the Russian import ban.