Grain price: US markets fall as corn acreage estimated up 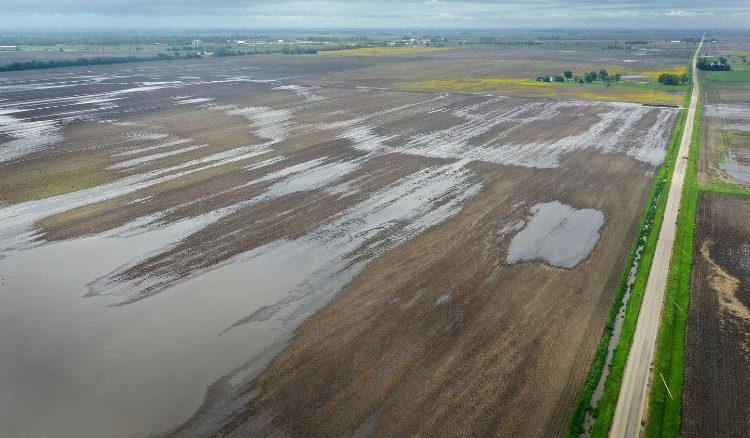 US corn plantings are estimated to have increased from 2018, according to the United States Department of Agriculture’s (USDA’s) acreage report which was released yesterday evening (5:00pm GMT), June 28.

This brings the soybean acreage to its lowest since 2013 – soybean acreage had actually surpassed corn in 2018 by a small margin. Difficult sowing conditions, as well as the continuing trade war with China impacted this figure, as soybean farmers remain affected by trade tariffs.

Other crops, such as wheat (total) fell in area by 5%. The area sown to barley increased by 12%, while the area planted to cotton fell by 3%.

It should be noted that as some farmers are still planting in the states some of these figures are based on farmers intentions to plant.

The USDA stated that it will repeat the acreage survey in 14 states affected badly by the recent poor weather conditions. The results of this will be published on August 12.

It is also important to take into consideration how the crops have been affected by late sowing and recent weather conditions. The USDA will release an updated crop progress report on Monday, July 1.

September corn prices had been trading at 444.4c/bu on Friday morning and hit 433c/bu following the announcement at noon.

Soybean price increased on the back of the drop in acreage. The August price (CBOT) increased from 896c/bu to 904c/bu once the acreage was announced. November price also increased from 914c/bu to 921c/bu.

How will this affect Irish farmers?

It is yet to be seen how the USDA report will impact on prices this side of the Atlantic, but a reduced maize price does not bode well for Irish grain price as could be seen in the season gone by.

Competitive maize took the place of barley and wheat in many rations last season and as a result cereal prices fell.

The week gone by

Lack of news, ahead of the USDA acreage report meant that markets didn’t move too much during the week, as can be seen in the prices detailed below. LIFFE wheat, although trading higher than the week before, was steady all week.

MATIF wheat for September recovered from its midweek drop last week and sat at €187.75/t on Monday, meaning for much of the week it was trading approximately €3/t higher than the week before.

Chicago Board of Trade (CBOT) wheat also showed a large increase. On Thursday, June 27, it finished 21c/bu higher than the same day the week before; perhaps on the basis of increased export trade in the US.

However, as reported this price dropped to 528c/bu on Friday afternoon, following the release of the acreage report.

Boortmalt suppliers missed out on the high of the market this week.

The Boortmalt price is based off the Planet FOB Creil price – that price settled at €176.50/t on Wednesday, June 26. This brings the current average price (to be paid at harvest) to €185.50/t. 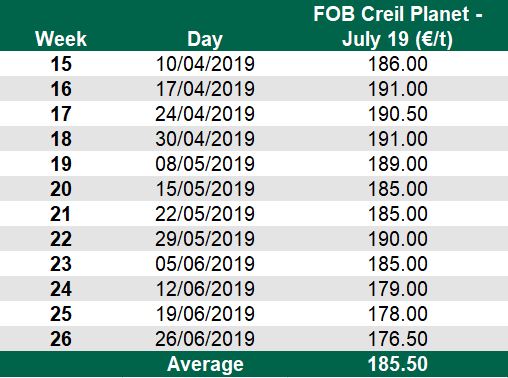 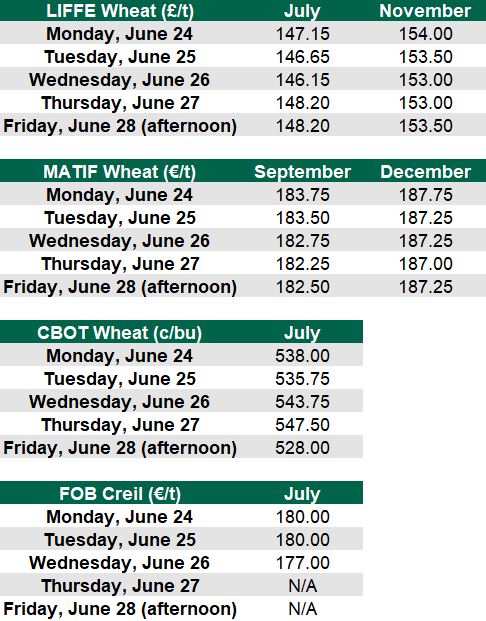 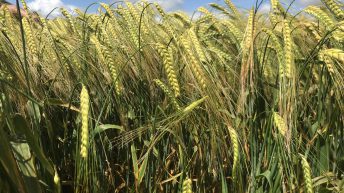 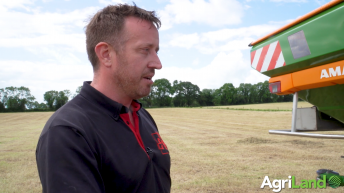