Noel O'Connor sent in this image of the winter barley harvest in Co. Westmeath as part of our Harvest 2019 photo competition

There doesn’t look to be any pot of gold at the end of the rainbow for this season, despite what the above image may suggest.

The wait will continue on price as harvest progress slows down amid broken weather. Some merchants have paid farmer’s amounts on account to provide cash-flow, but a final price is the harder figure to get.

One thing farmers can be sure of is that the price paid for grain will not be an outstanding one. Some fear that that prices are tumbling near the lows of 2017. The signs aren’t promising. Taking a look at what’s happening around the world might help to paint a picture of what’s pressuring prices.

As a result of the large harvest on the continent, EU exports are reported to be slow.

French wheat prices are expected to trade lower to find demand for exports. Yields are also expected to be good in the UK and prices will have to be competitive to secure a market.

Yields of wheat and barley in Ukraine are also reported to be up in almost all regions. According to Agritel, 92.5% of the wheat harvest is complete in the country, while 92% of the barley harvest has been finished.

In order to sell in a competitive market it looks like EU wheat prices will be lowered.

In the US, almost 80% of corn had reached the silking stage as of August 4, according to the United States Department of Agriculture’s (USDA’s) crop progress and condition report.

At the same time last year, almost 100% of the crop was at the silking stage, similar to the crop progress across the five-year average.

Approximately 15% of the crop is reported to be in very poor or poor condition, while just over 40% of the crop can be included in the fair, poor and very poor categories.

As of August 4, approximately 80% of winter wheat had been harvested in the US. Over 60% of the winter wheat crop is reported to be in good or excellent condition. 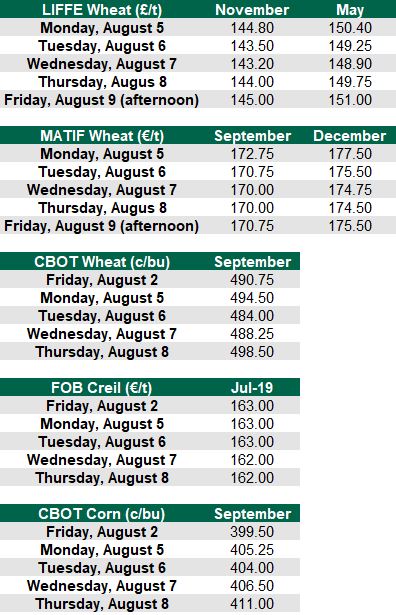 The average of the Free-On-Board (FOB) Creil Planet price – which will be used as Boortmalt suppliers’ base price at harvest – now stands at €179.22/t.

The averaging model uses the Planet price at close of business every Wednesday from April 10 to September 18.

Graindex comes to Ireland this weekend